Blancpain Fifty Fathoms - Not Just an Archetypal Modern Diver’s Watch, but an Icon of Style and Innovation | SENATUS

Blancpain Fifty Fathoms - Not Just an Archetypal Modern Diver’s Watch, but an Icon of Style and Innovation

Sixty-five years since it was first launched, the Fifty Fathoms timepieces continues to impress with design refinements and technological innovations...

In 2018, Blancpain marks the 65th anniversary of its Fifty Fathoms timepiece, a "Blue Sapphire" anniversary, no doubt an impressive milestone to celebrate. Launched and conceived before the Rolex Submariner and Omega Seamaster, the appeal of the iconic watch from the 283-year-old Swiss manufacture endears, and its legacy has an irrefutable place in the annals of diver's watches.

Dialing back the clock, the birth of the Fifty Fathoms was firstly a result of the work started by Jean-Jacques Fiechter, a passionate diver who was Blancpain’s CEO for three decades, from 1950 to 1980. His mandates to come up with a wristwatch suitable for diving purposes saw the creation of a double-sealed crown system to solve the water resistance problem, then a secured rotating bezel to measure the time of a dive, and subsequently, a unidirectional rotating bezel, a world-first feature which also ensured safety during a dive. Automatic winding of the movement was later implemented, helping to reduce the wear of the crown against its seals.

But the development of the iconic had a separate timeline as well, as the French "Nageurs de Combat" (combat swimmers), an elite team of tactical soldiers led by Captain Bob Maloubier, was seeking a solution to keeping the time of their dives as well. Integral to their missions which included underwater intelligence, sabotaging operations, and clandestine port-attacks, the French frogmen were using watches that were far too small, the dials were hard to read, and the cases were far from waterproof.

In 1953, Blancpain was able to deliver to the French military divers a watch for testing that fully met their criteria. The watch performed brilliantly in all of the tests and it became one of the essential pieces of equipment for the French combat swimmers corps. Later, it would adorn the wrists of naval forces around the world.

The ideas and concepts woven into those first Fifty Fathoms have defined diving watches for the entire industry ever since. Today, Blancpain now also accompanies divers and underwater photographers in their exploration and discovery of the oceans' fragile beauty, contributing to the knowledge of this fascinating universe and to the motivation to protect it.

All Fifty Fathoms models now feature the main signature elements that forged the reputation of their legendary ancestor and established it as the archetypal diver's watch. We take a look at four Fifty Fathoms timepieces that continue to bear the mantle for the collection… 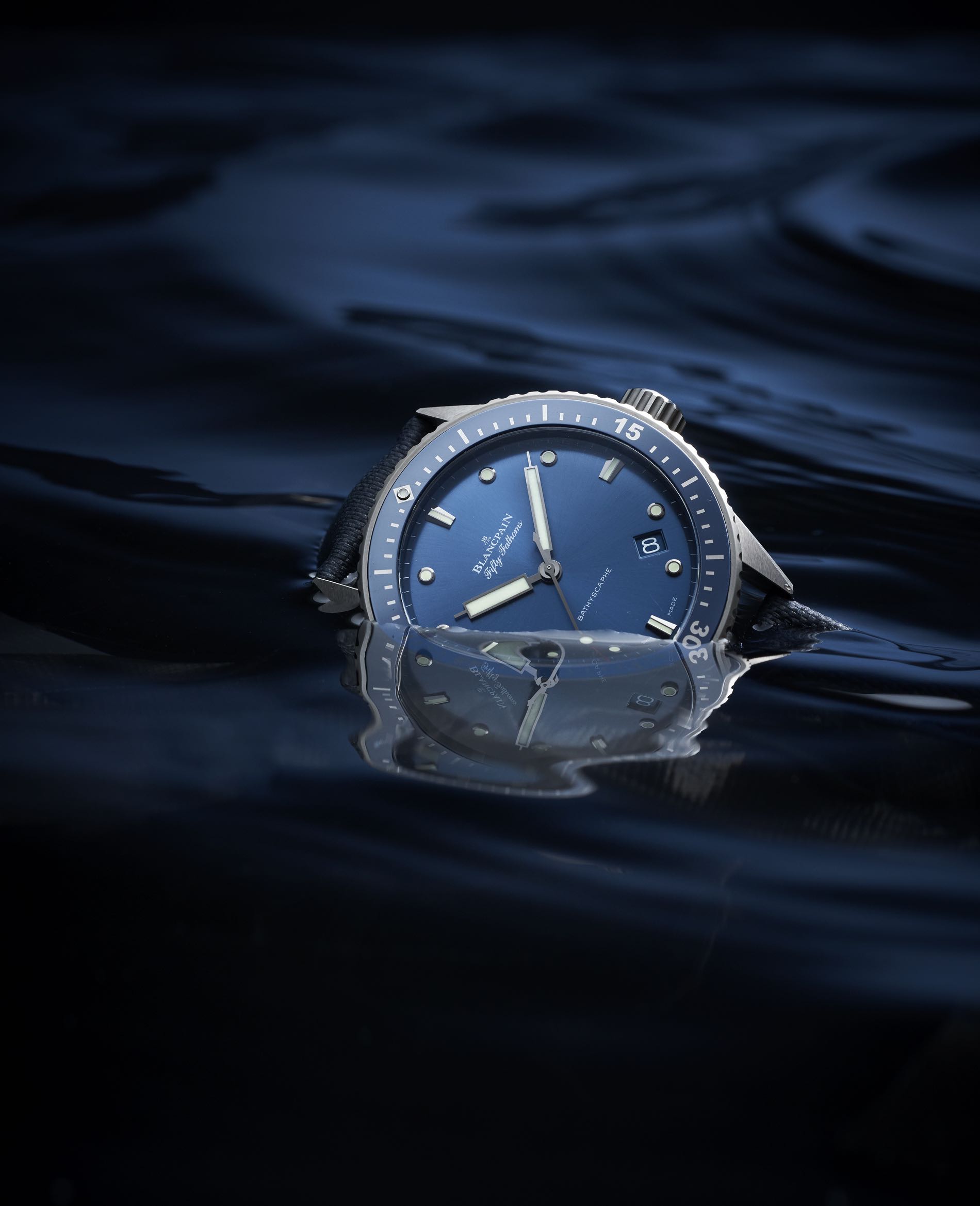 One of the core timepieces in the collection, the three-hand model of the Fifty Fathoms Bathyscaphe is available with a deep blue dial evoking the depths of the sea. A blue ceramic insert featuring Liquidmetal® hour markers sits in the bezel made of grey plasma ceramic, which was first used for the Bathyscaphe Chronographe Flyback Ocean Commitment launched in 2014, and its special production technique produces a subtle yet distinctive metallic shade.

The Fifty Fathoms Bathyscaphe is water-resistant to 30 bar, equivalent to 300 meters. The self-winding (automatic) caliber inside is the famous 1315, distinguished by its sturdiness, and exceptional chronometric performance. It is fitted with a robust glucydur balance wheel, with square-head gold micrometric regulating screws guaranteeing precision as well as efficient adjustment. Its three series-coupled mainspring barrels provide an impressive five-day power reserve, a technological feat considering it provides a constant supply of energy over 120 hours.

The movement is viewable through a clear sapphire caseback and is fitted with a balance-spring made of silicon. The use of silicon is a recent innovation and provides several key improvements: its low density means it is particularly light, possesses strong shock-resistance, and is imperviousness to magnetic fields. These properties come together to ensure the almost perfect geometry of the balance-spring, thereby improving the isochronism of the movement and hence the precision of the watch.

This timepiece is offered with two strap options: a three-ring NATO strap or a sail canvas version. 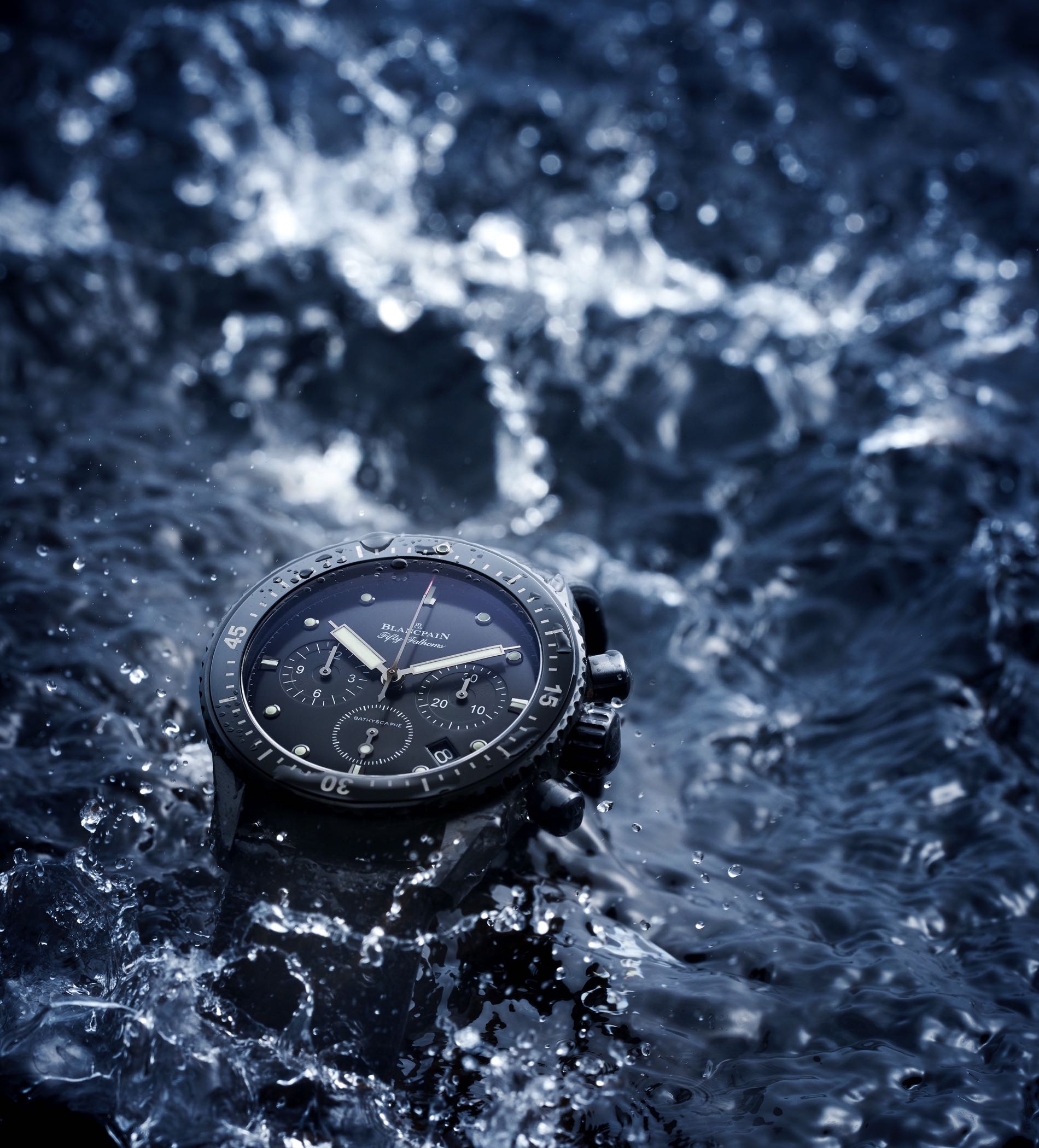 The Fifty Fathoms Bathyscaphe features the self-winding F385 movement that gives it a flyback chronograph function, able to make fast measurements of successive time periods. Whilst the chronograph had traditionally been used in motorsport racing, it is just as applicable measuring lap times both in the pool, or on the track. Housing a 13-lignes Manufacture Blancpain movement beating at a rate of 36,000 vibrations/hour, the Fifty Fathoms Bathyscaphe Chronograph Flyback is equipped with a column-wheel chronograph mechanism and a vertical clutch. The flyback function enables the wearer to reset and instantly restart the chronograph simply by pressing the pusher at 4 o’clock.

The sunburst finish on the dial and the snailed chronograph counters add a sense of depth to the overall effect. Its rectangular hands are reminiscent of those featured on the 1950s Bathyscaphe models.

The ceramic unidirectional rotating bezel bears hour-markers filled with LiquidMetal® — a patented metal alloy with an amorphous structure that also enables perfect bonding with the ceramic bezel, thereby accentuating its scratch-resistance. In addition, Super-LumiNova® applied on the key elements come together to guarantee perfect readability when diving.

The 43 mm diameter Bathyscaphe is available in a brushed black ceramic version with a black dial, or in brushed steel with a meteor-grey dial. All models are available with a NATO fabric or sail canvas strap. The steel version also comes on a metal bracelet, a first for this line. 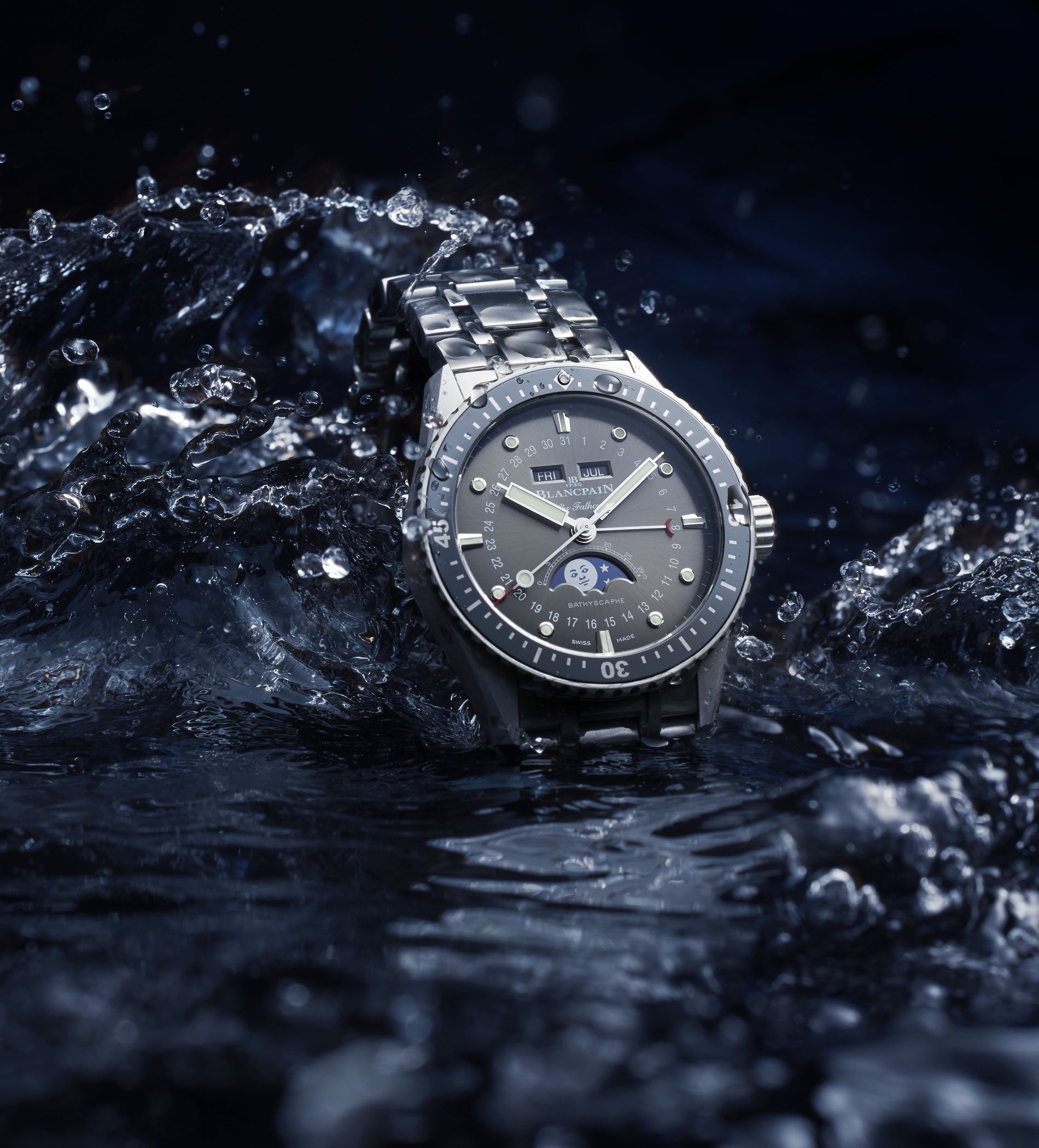 The dial sees the day of the week and month shown in windows, the date displayed by a supplemental hand sweeping around the inner perimeter of the dial, whilst the moon phase appears in an extra-large window at 6 o’clock. This follows the layout in Blancpain’s classic watches.

The calendar mechanism boasts a special safety feature, protecting the mechanism from breakage, commonly experienced in conventional calendar constructions — For example, if an owner were to adjust the calendar during its midnight change.

The positioning of indexes and the main hands on the meteor-gray dial maintain the traditional look of vintage diver’s watches, and are also coated with Super-LumiNova®, in all maintaining optimal legibility.

The Bathyscaphe Quantième Complet Phase de Lune is offered in a 43 mm satin-brushed steel case. Similar to the earlier pieces introduced, it is also equipped with a unidirectional rotating bezel featuring a ceramic insert whose indexes are filled with Liquidmetal®. This watch is offered with a sail-canvas or NATO strap, as well as a metal bracelet. 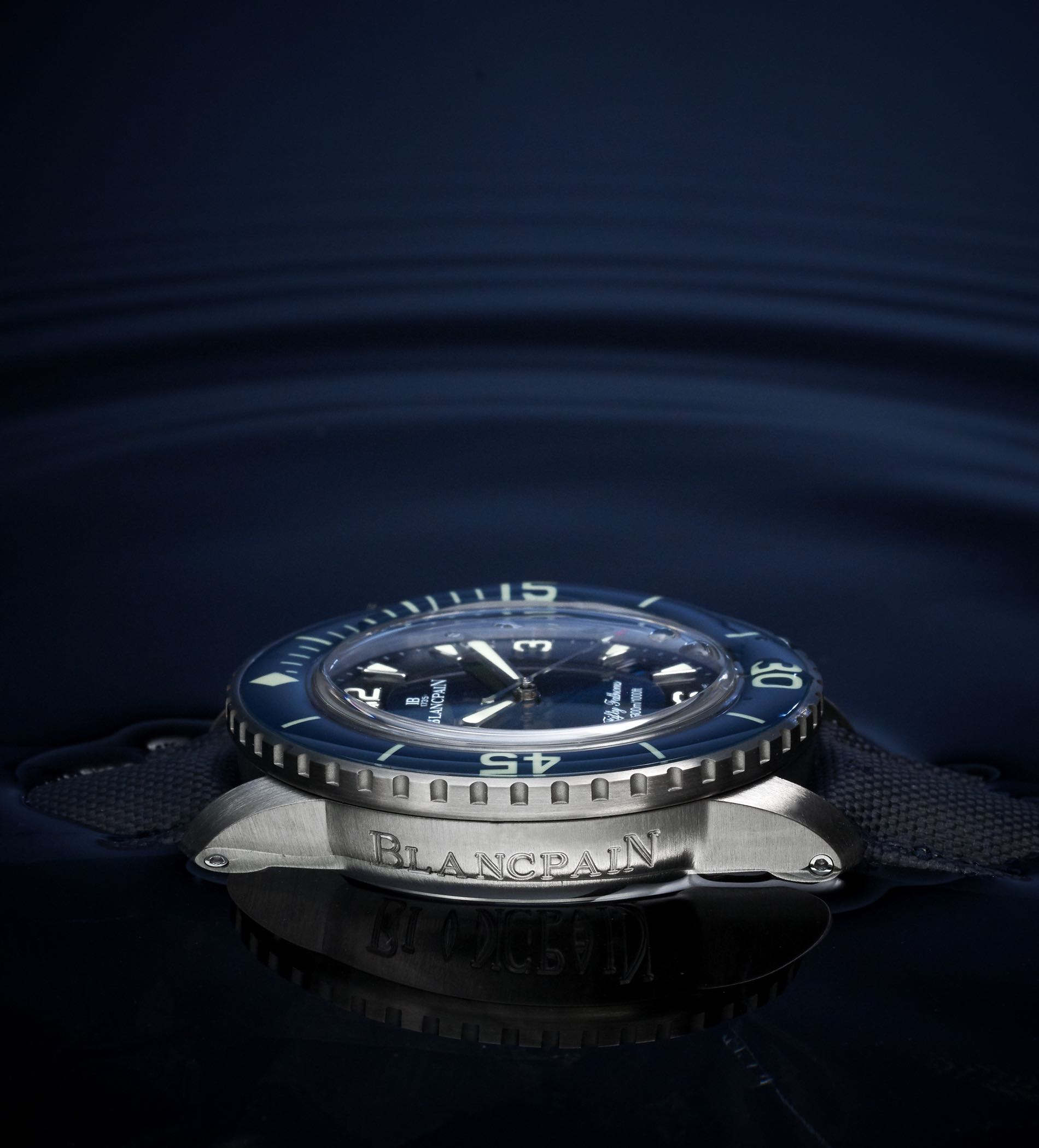 A classic favourite within the line-up, the Fifty Fathoms Automatique was built for divers but fits in just as well on land, giving the sartorially-inclined a sharply-attractive timepiece.

Inside, the exceptional caliber 35-jeweled 1315 calibre provides a 120-hour (5 day) power reserve, enclosed within a 45 mm case with a 15.4 mm height. On its side, the Blancpain logo sits between the short and curved lugs, which ensure a more comfortable and snug fit around the wrist in spite of its larger diameter.

The Fifty Fathoms Automatique bears all the hallmarks of the collection: water-resistant to 30 bar, it features a ceramic unidirectional rotating bezel protected by a curved and protruding sapphire, with hour-markers filled with LiquidMetal®. On the dial, its large triangular indexes, as well as dial's markings and hands, are coated in Super-LumiNova®. Date is displayed through a window between the 4 and 5 o’clock position while the time is presented by the brand’s signature sword hands, and a sweeping red-tipped arrow seconds hand.

A myriad of options are available across the Automatique line. Featured here is this timepiece in blue with a satin-brushed case on a sail canvas strap. 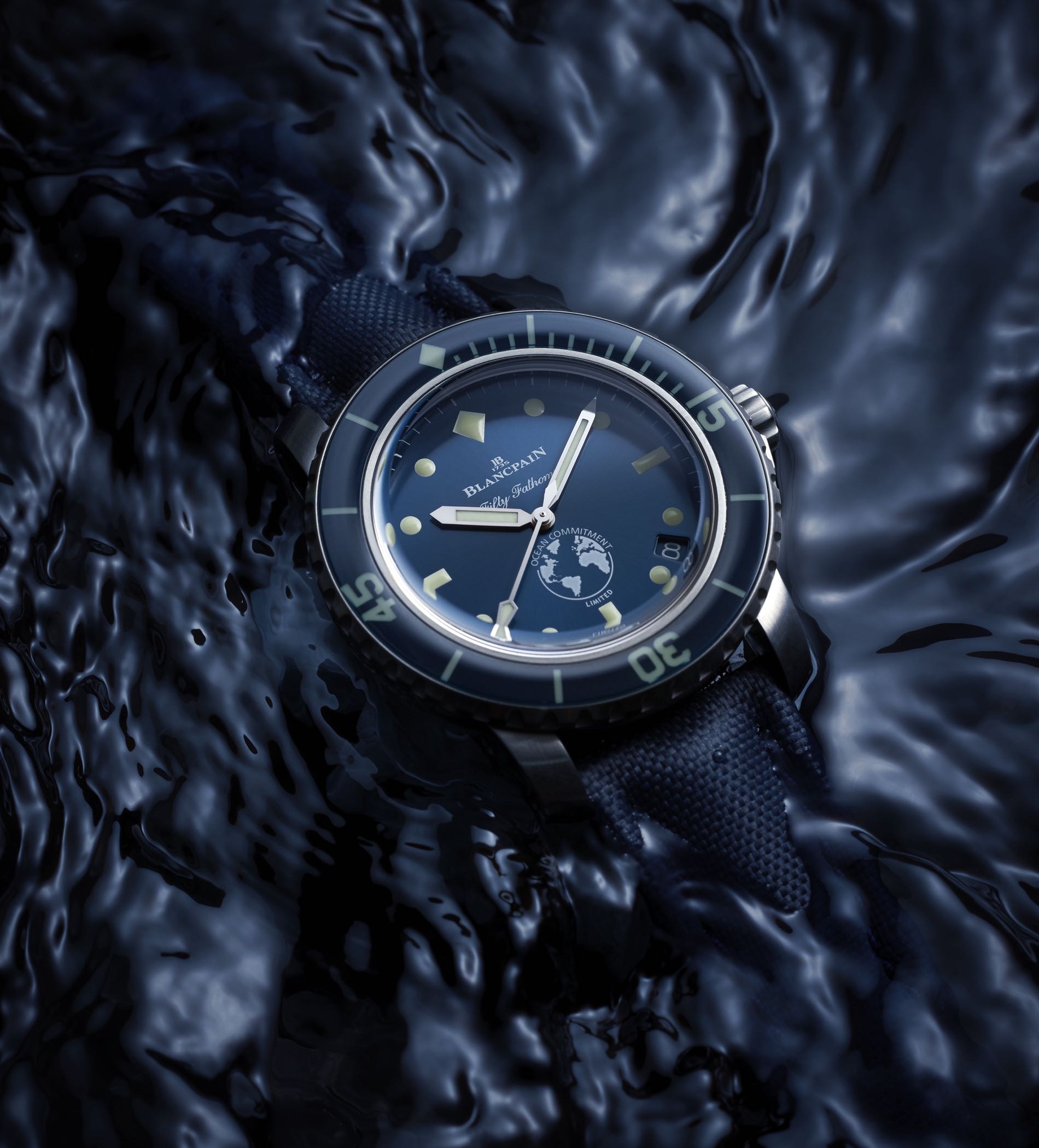 Four years ago, in addition to Blancpain's annual support to expeditions and major oceanographic projects, the brand introduced a first series of limited edition BOC (Blancpain Ocean Commitment) timepieces. Blancpain extended this initiative in 2016 and is now unveiling the third BOC timepiece in 2018.

The third iteration of the BOC timepiece houses a reliable and robust self-winding movement, caliber 1151, which has a four-day power reserve. The balance is fitted with a silicon hairspring, a material insensitive to magnetic fields, meaning the watch is able to now forgo with an inner soft iron case, which was the solution used in the past. A transparent sapphire case-back provides clear views of the movement's fine Côtes de Genève decoration, as well as of the gold winding rotor specially engraved with the inscription "Ocean Commitment" and featuring a NAC finish (an alloy notably composed of platinum).

The timepiece is water resistant to approximately 300 meters, and has a unidirectional rotating bezel. Blue in colour as a reference to the oceans, the bezel is topped by a scratch-resistant sapphire ring, an innovative feature introduced by Blancpain in 2003. Its large indexes are in Super-LumiNova®, as are the dial's markings and hands, thus ensuring optimal readability in underwater conditions. The dial shares the same deep blue colour of the bezel, with the BOC logo at 6 o'clock position.

The new Fifty Fathoms Ocean Commitment III is offered in a 40 mm diameter satin-brushed steel case, an exclusive diameter reserved for limited-edition Fifty Fathoms watches. It comes with a sail-canvas strap and an additional NATO strap, both matching the colour of the dial and the bezel.

Blancpain will contribute 1,000 euros with the sale of each watch. A total of 250 pieces available means the sum of 250,000 euros will be added to Blancpain's much larger contribution to the cause of ocean protection.

Each of the 250 watches will all be individually numbered, and comes with a corresponding hand-numbered copy of the Edition Fifty Fathoms book, which incidentally marks its 10th anniversary this year. This landmark edition is composed of stunning black & white underwater photographs printed on pages bound with removable screws, thus enabling the owner to extract a selected page and place it within a picture frame supplied with the book.