At Breitling's presentation held during Baselworld 2019, CEO Georges Kern gave audiences a holistic overview of the brand's multi-pronged strategy - the first time in a public arena that members of the media and partner retailers were treated to what was a thorough and thoughtful explanation of, and execution going forward, for the Swiss watch company.

Kern needed the time since he took over to make everything fall into place before showing the cards, and boy, the deck was flush indeed.

The first he explained, was a realignment of the product lines into easily identifiable and understandable categories. Air, Land and Sea, as well as Premier, delineates the different watch collection's intended natural habitats, with these then intersecting with different levels of executions (in-house movements, complications, etc).

The second was the re-introduction as well as roll-out of new timepieces, respectively leveraging on the extensive archives of Breitling. This taps on a rich heritage that for the last few decades had been overlooked. But no more.

The third was the notion of "shared values." The charismatic executive elaborated that consumers of today desire to make that emotional connection, and thus advertising, marketing or other brand associations have to come across as organic, as natural, as something not forced.

It is this very same philosophy that drove how the Breitling Squads have been out together. The teams of ambassadors do not just play the role of being famous faces, but more importantly exhibit excellence in their individual pursuits. Yes, it helps and matters if the target consumer does recognize these squad members, of course. But on the other hand, it doesn't matter so long as the audience knows that whilst they may not be well-versed in, say, surfing, that Kelly Slater, Stephanie Gilmore and Sally Fitzgibbons are at the very top of their game in the sport. Once they realize that, then the partnership between the superlative and best-selling SuperOcean timepieces with the Breitling Surfer Squad makes absolute sense, whether you surf, sail, or swim.

This concept of shared values is also epitomized by the new collections unveiled by Breitling. Three of these limited edition timepieces see Breitling coming together with brand partners whose rich legacies and common vision going forward, tell of a very organic collaboration. 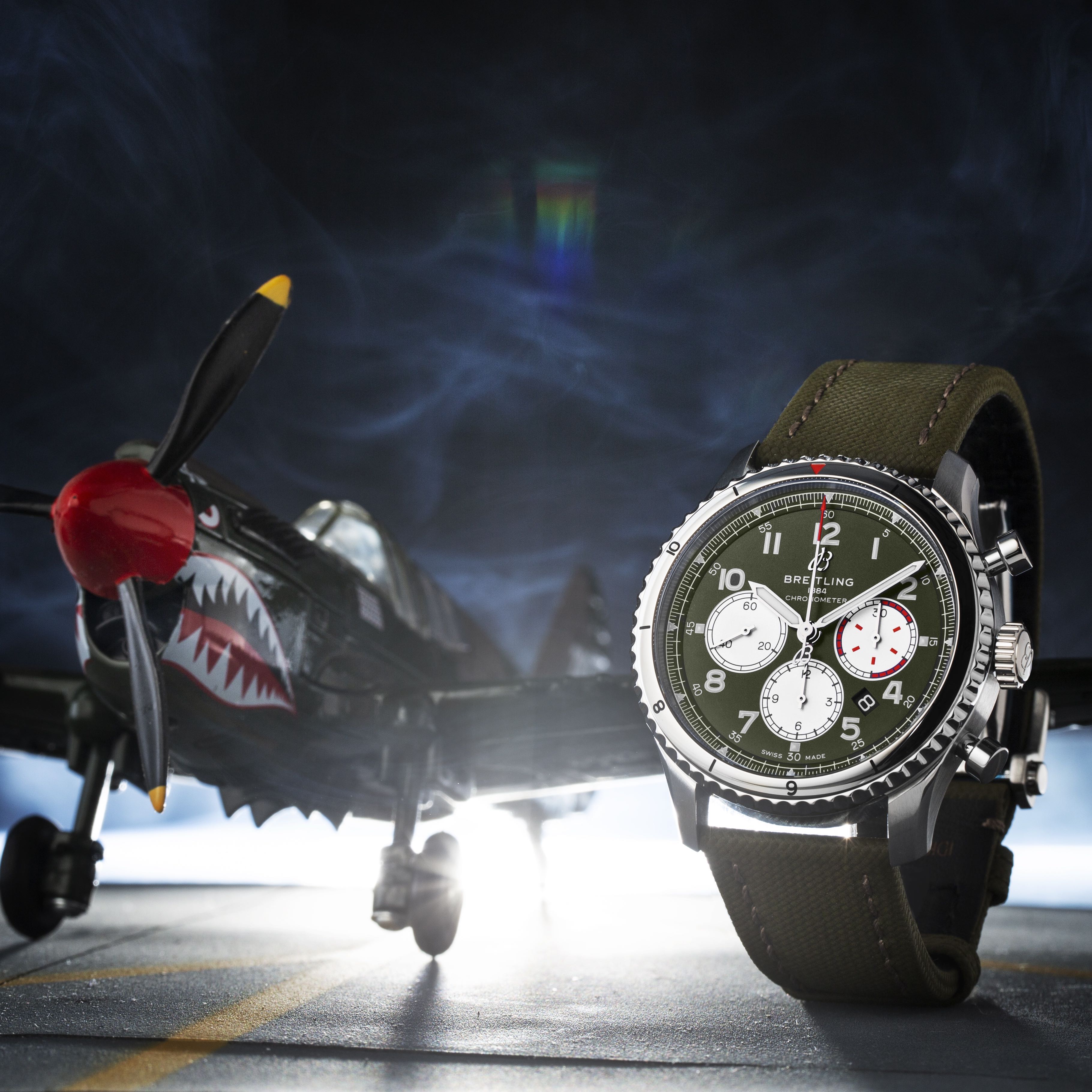 In the 1930s and 40s, whilst Curtiss Wright Corporation was producing its the P-40 Warhawk, Breitling's Huit Aviation Department was creating on-board clocks for some of the world's leading aircraft manufacturers.

The new collaborative timepieces pay tribute to one of Breitling's early pilot's watches, the iconic Reference 768, which featured a rotating bezel and distinctive triangular pointer.

The P-40 Warhawk is instantly recognisable by its shark's mouth and colour scheme, and its characteristic paint job associated with the plane when it was piloted by the American Volunteer Group in the Chinese Air Force's famed Flying Tigers unit, has been translated unto the new watch collection. Contrasting silver sub-dials which indicate that the watch is driven by the Breitling Manufacture Caliber 01 (the brand's in-house mechanical movement) sit on a green dial with matte finish.

The chronograph is equipped with a bi-directional rotating bezel featuring Arabic numerals and indexes as well as a practical red pointer. The hours and minute hands, as well as Arabic numerals have been given Super- LumiNova® coating to provide legibility in low light conditions. These various elements give the Aviator 8 B01 Chronograph 43 Curtiss Warhawk a distinctly "modern retro" appeal, which exemplifies the new Breitling design direction as well.

The COSC-certified chronometer in a 43 mm stainless steel case is available in a green military strap. It is water-resistant up to 100 metres and delivers a power reserve of approximately 70 hours. 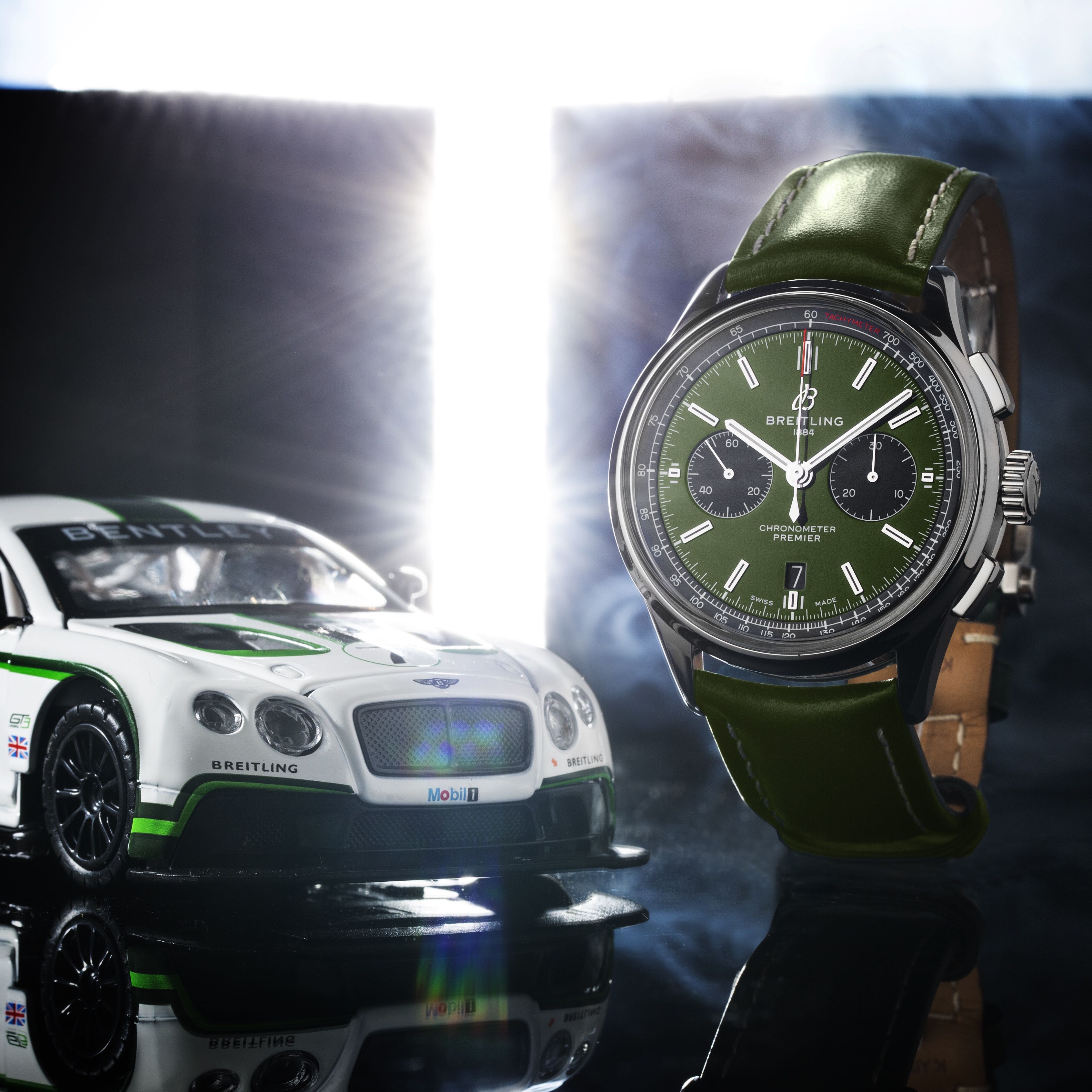 Breitling has announced it is renewing its partnership with Bentley, having worked with the British luxury car manufacturer since 2003, when Breitling became the first watch­maker entrusted to design an onboard clock for Bentley's flagship model, the Continental GT.

In what is one of the oldest cross-category cross-brand partnerships, Breitling CEO Georges Kern explains, "Bentley and Breitling share so many values. Both companies are known for quality, performance, and design excellence, and both can build on powerful historical legacies. It’s an ideal partnership, and, after more than 15 years, it is a pleasure to add another chapter to it."

One of the changes in the new Breitling strategy includes the integration of future special Bentley editions into Breitling's core product offering rather than in a separate "Breitling for Bentley" collection. The first of these extraordinary watches is the Premier B01 Chronograph 42 Bentley British Racing Green.

Breitling's flagship Manufacture Caliber 01 in-house mechanical movement is viewable through a transparent caseback with a metalized Bentley logo. The watch also features an engraved plate with a "Bentley" inscription on its side, which was inspired by the dashboard of the historic supercharged 1929 "Blower" Bentley. 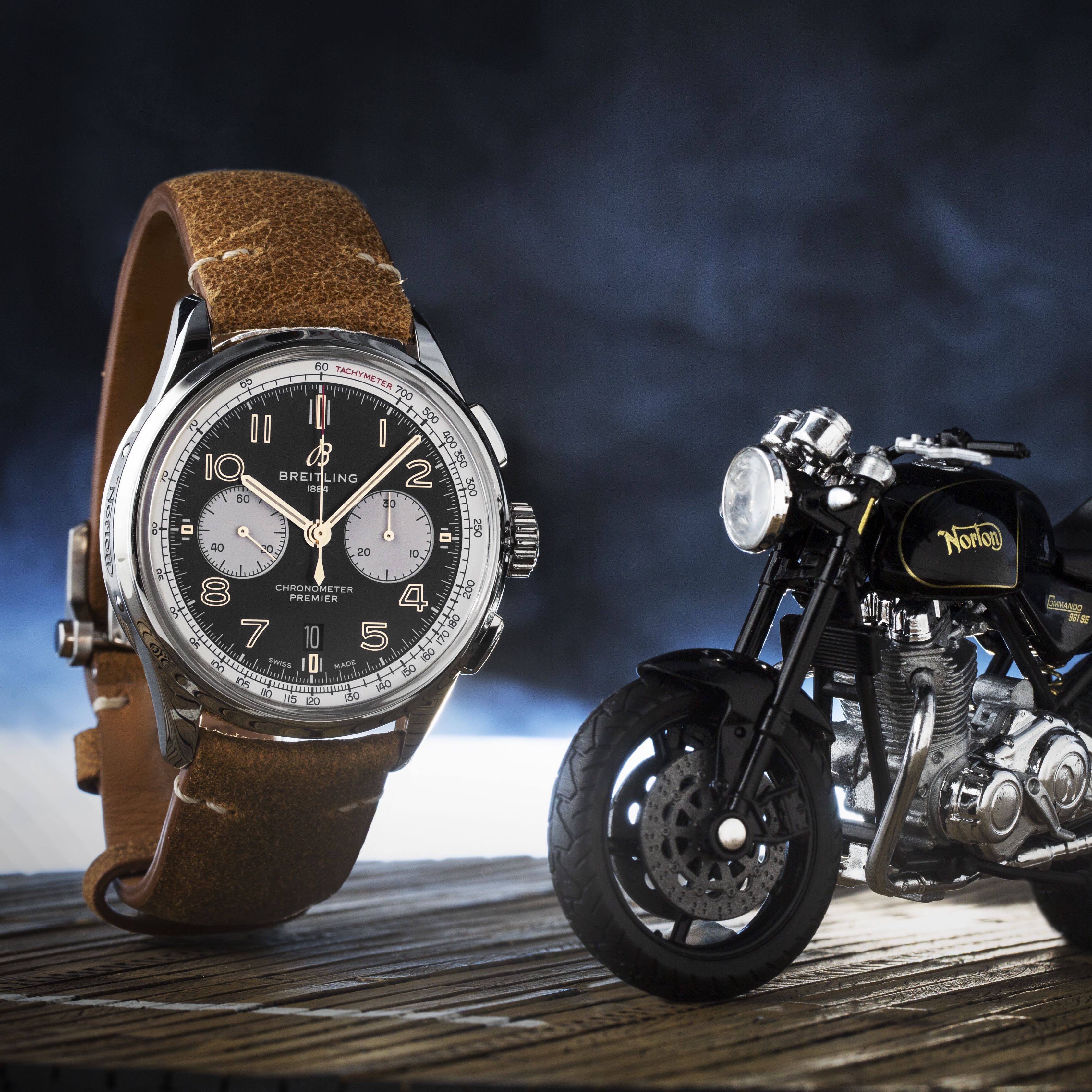 Both Breitling and Norton Motorcycles were founded in the nineteenth century by visionaries who gave their names to their companies and, to a large extent, defined their industries. Both are modern icons.

When James Lansdowne Norton set up his company in 1898 and produced his first motorcycles in 1902, Léon Breitling had already been making watches in the Swiss Jura Mountains for more than a decade. Incidentally, both brands were separately featured in James Bond films, with 007 wore a Breitling Top Time in 1965's Thunderball and a Norton Dominator SS had a supporting role in 2015's Spectre.

The Breitling Premier B01 Chronograph 42 Norton Edition is a dovetail of refined Swiss watchmaking and exclusive British engineering, and is is part of Breitling's new Premier collection (the fourth pillar mentioned in the introduction), a family of elegant watches defined by their fashionable flair.

Stuart Garner, CEO of Norton, adds, "Breitling's new Premier Norton Edition incorporates DNA elements from both brands, offering wristwatch and motorcycle fans the opportunity to express their individuality, and perfectly embodies the nature of our brands."

On this limited edition watch, the  "Norton" logo is engraved on a plate on the left side of the 42 mm case, and the transparent caseback features a printed Norton motorcycle and logo. Its elegant black dial with golden numerals and hour and minute hands contrast with the brown raw-leather strap, giving it the same "modern retro" and urban chic appeal in new Breitling offerings. The timepiece is also available with a stylish stainless-steel bracelet.

The sub-dials in silver, a different colour from the black dial, is a reminder once again that it is the in-house Breitling Manufacture Caliber 01 movement inside, which delivers a power reserve of approximately 70 hours.

The COSC-certified chronometer also features a black tachymeter scale on a white inner bezel around the dial, with "TACHYMETER" inscribed in red. The hour and minute hands are coated with Super-LumiNova®.

From what we understand, the Premier B01 Chronograph 42 Norton Edition is just the beginning of a special partnership between these two extraordinary brands.