Some watch brands have the town of "Glashütte" imprinted on their dials but there's definitively only one Glashütte Original and its integral role in fine German watchmaking whilst little known, is irrefutable.
Find out how this came to be.

The company emerged in the early 1990s from the privatization of the East German conglomerate Glashütter Uhrenbetrieber and was subsequently acquired by the Swatch Group in 2000, which refurbished and re-opened Glashütte Original's manufacture in 2003 quickly establishing it as a force to be reckoned with within the German watch industry. 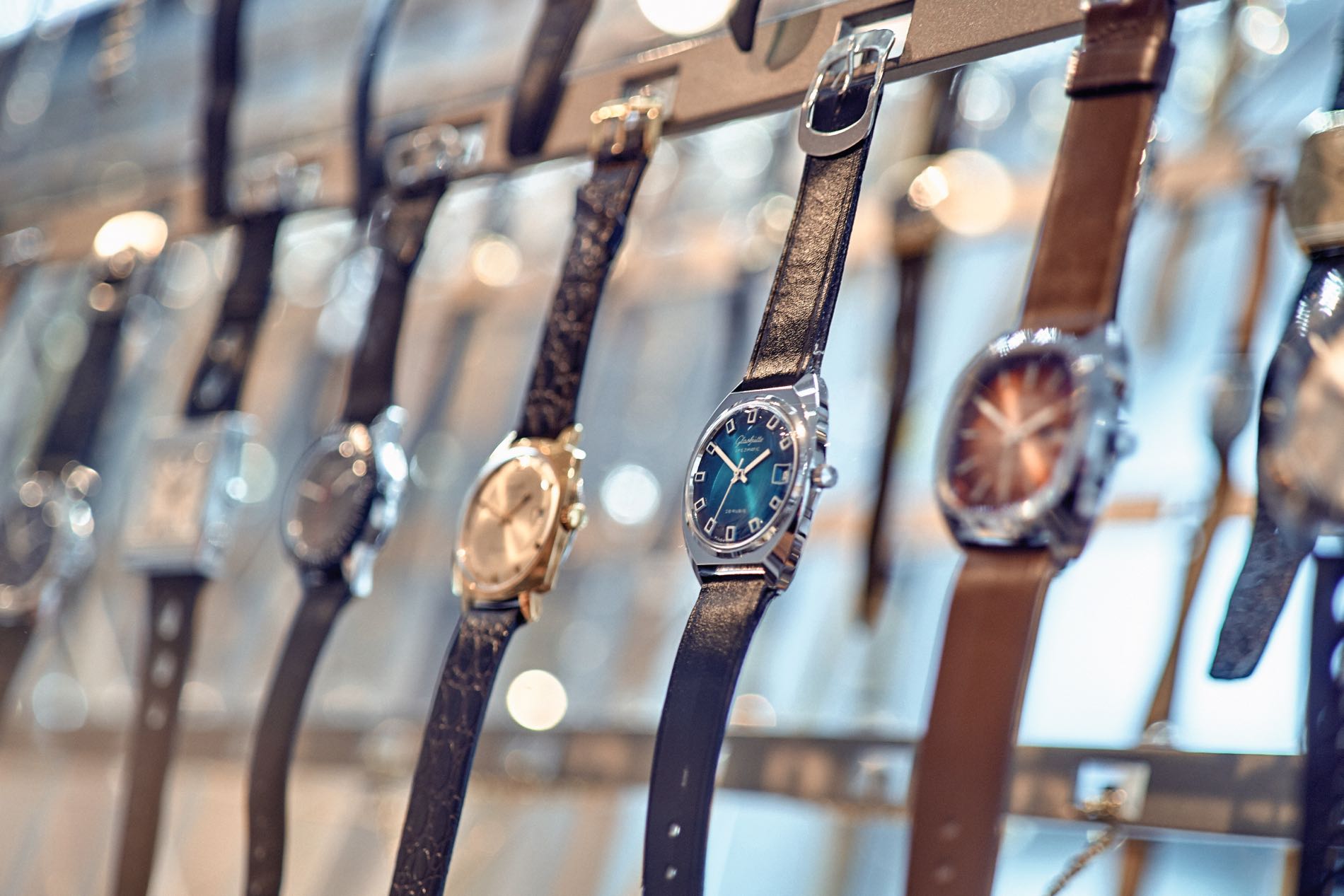 Glashütte Original is one of the rare watch brands that can legitimately claim to be making more than ninety-five percent of its components in-house and the watchmaker has become known for offering innovative and useful complications, such as with its Senator Diary, the first watch to let you set an alarm for any point in the next thirty days, and the Senator Cosmopolite, an elegant watch with a unique mechanism offering two time zones on the dial and lets the wearer choose from up to 35 time zones (not just the usual 24), including those that use half- and three-quarter-hour differences. 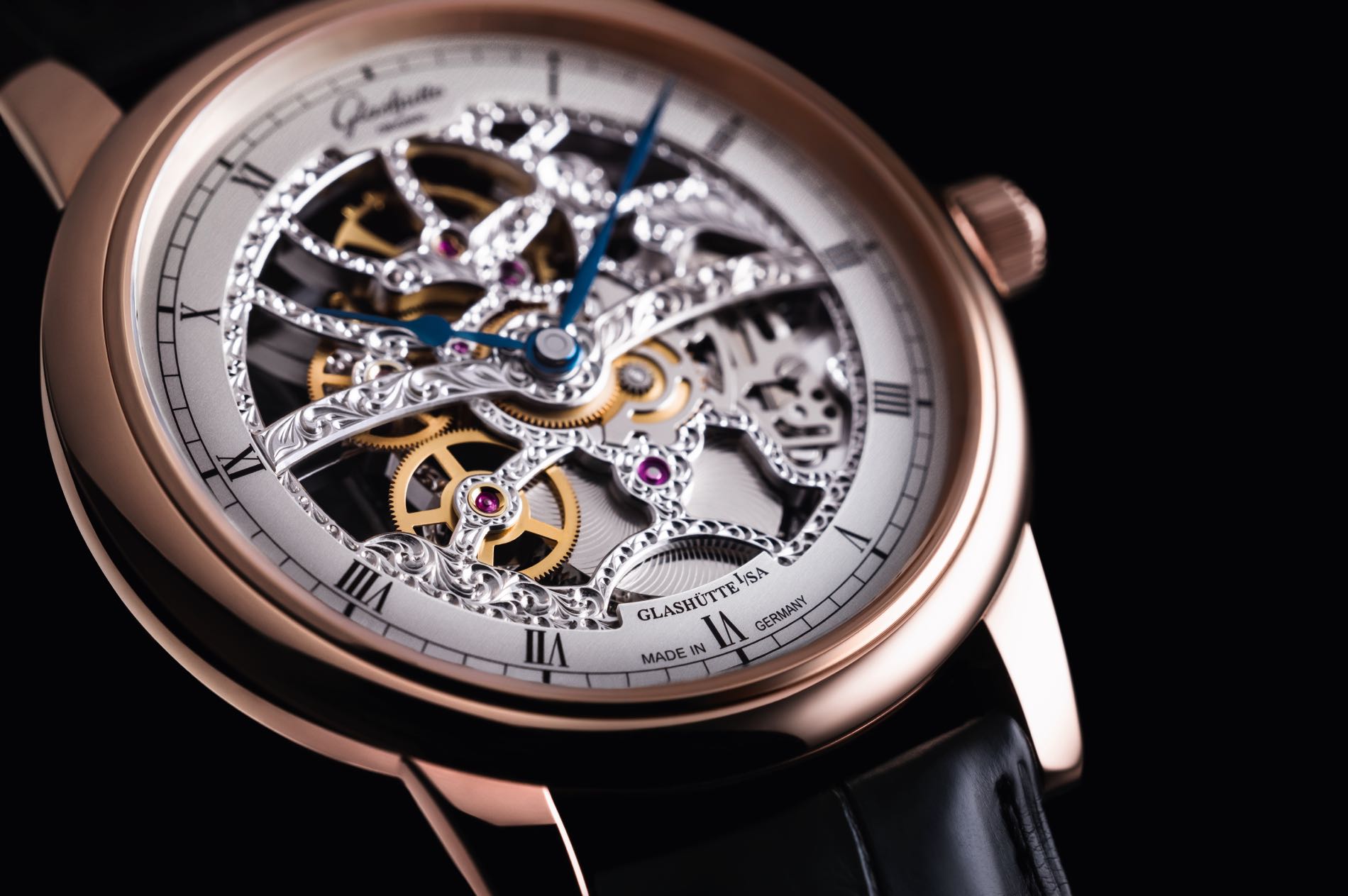 But behind this seemingly short historical façade, there is much more to Glashütte Original's understated, elegant watches, and while they may be less well known in some markets than say those made by A. Lange & Söhne, they can lay claim to the same long ancestry. 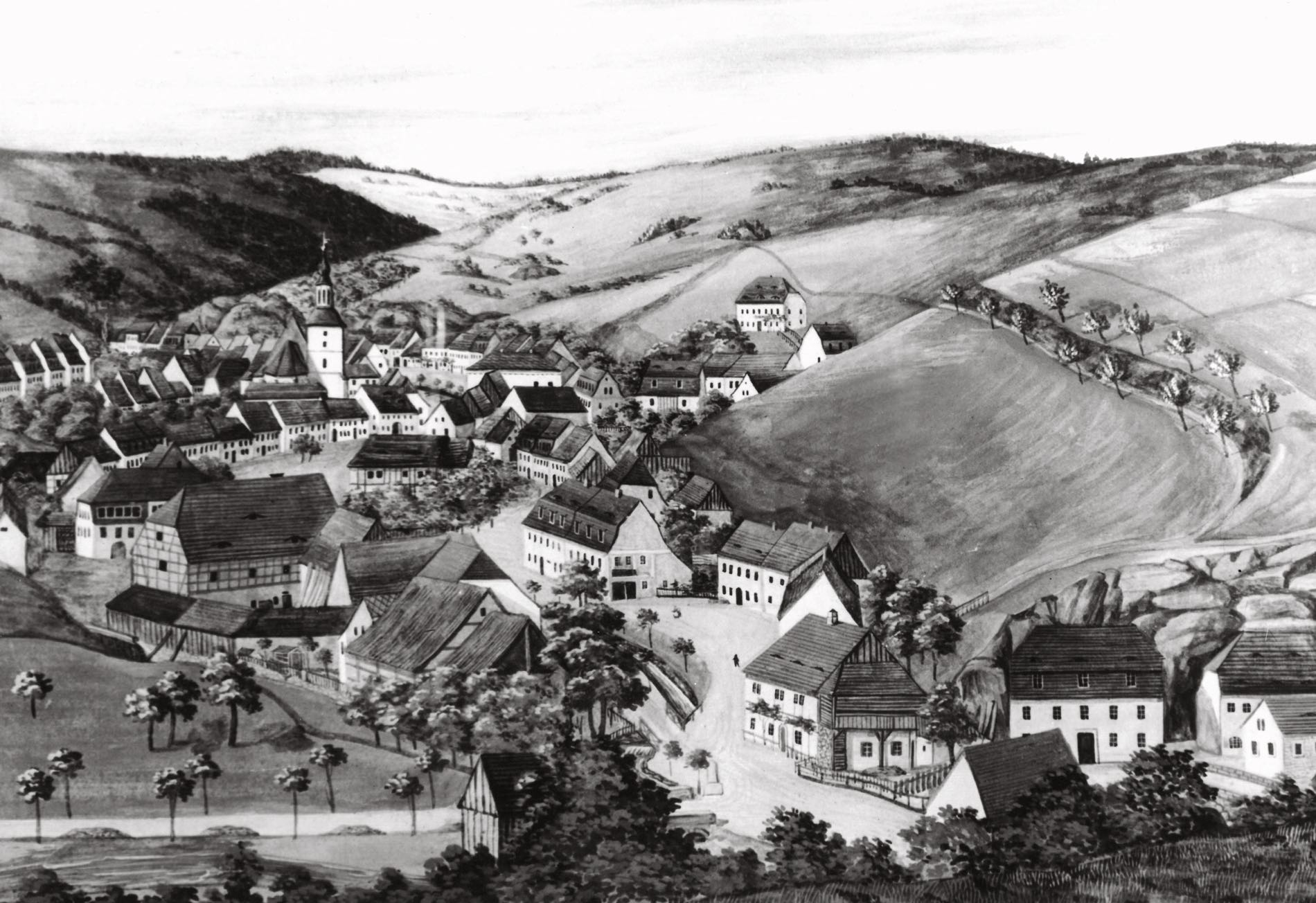 While the name of the town implies there may once have been a glassworks in the area, no evidence of such activity has ever been found. Instead the first documented mention of Glashütte is in reference to silver and iron ore mining in 1445 and at the height of its mining work, the town and surrounding area had one hundred mines registered by the authorities. However, by the 19th century, the ore was depleted and the succeeding basket weaving industry had not brought in the anticipated economic benefits to sustain the area. Thus the government of Saxony called on new companies to settle in the mountainous region and this is when Lange made a proposal based on a business model he had observed in the Swiss Vallée de Joux: a watch industry based on the division of labour with components produced by different specialists.

Lange, a former apprentice and son-in-law to the royal watchmaker Johann Christian Friedrich Gutkaes, offered to train 15 people in exchange for a government loan that helped him set up his own manufacture. To help him, he roped in Adolf Schneider, another apprentice of Gutkaes and by then an established watchmaker who later became Lange's brother-in-law, after Schneider married Gutkaes's youngest daughter.

The goal was not just to set up a single manufacture, but to create a centre for mechanical precision timepieces. Each apprentice was taught to craft different watch components, which Lange's manufacture then used to create the final timepieces. By 1848 the first 17 watches were ready to be sold, and while the apprentices started their own specialist companies, the town soon also attracted established watchmakers such as Julius Assmann (1827-1886), who set up the German Precision Pocket Watch Factory in 1852, and Moritz Grossmann, who settled in Glashütte in 1854 and would later found the German School of Watchmaking (1878), which trained some of finest watchmakers in the world. 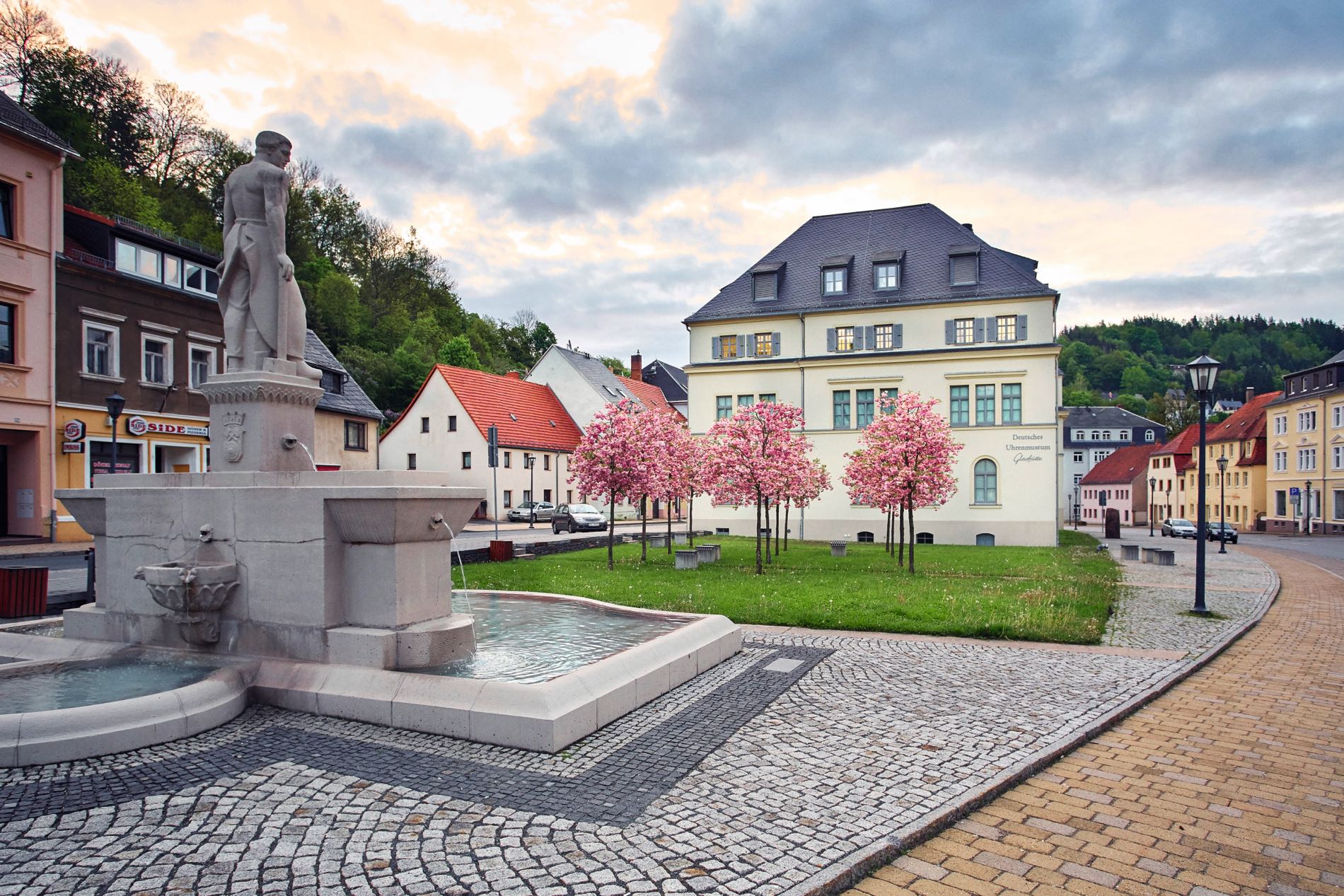 From the start, watchmakers in Glashütte focused on manufacturing very precise high-end pocket watches but it took about 20 years and several evolutionary phases for a distinctive German watch style to be established.

"The three-quarter plate is a key difference between Glashütte and Swiss watchmaking, it is the most obvious difference in movement construction," explains Reinhard Reichel, director of the German Watch Museum in Glashütte. 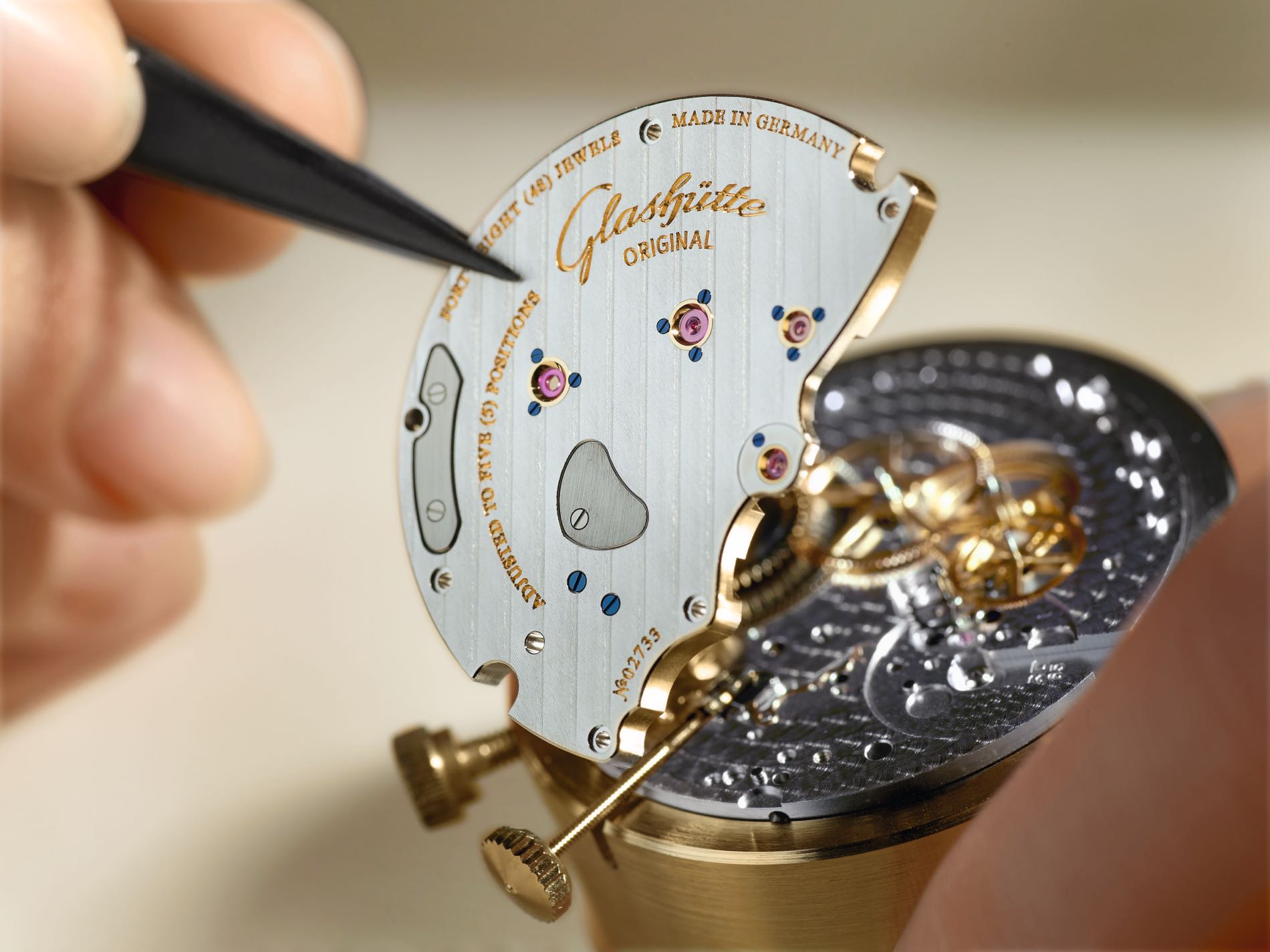 The three-quarter plate is what holds down the gear train and spring barrel, which contains the mainspring, and while some Swiss watchmakers (such as Jaeger-LeCoultre) also use it, they tend to favour a bridge construction design that offers aesthetical advantages and supports separate mechanisms making it easier for the watchmaker to service the watch without having to disassemble it. A plate construction makes all the mechanisms sturdier. 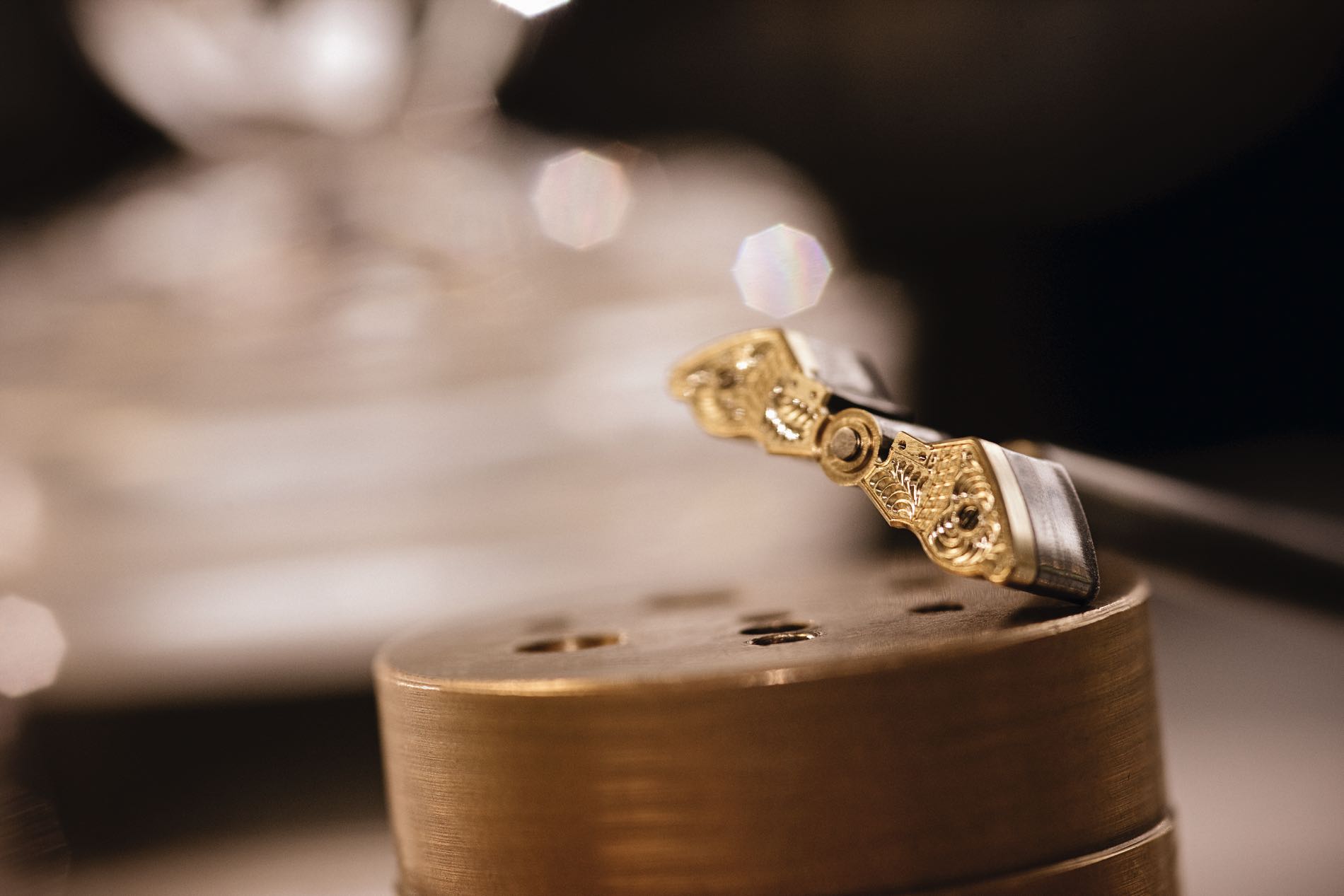 Other differentiations include a swan neck-shaped steel spring used for fine regulation, the use of the Côtes de Glashütte decoration on the plates (which are engraved freehand and wider than the Côtes de Genève), and the use of screw-mounted gold chatons (tiny protective rings) on the three-quarter plate to hold the rubies (today synthetic ones) put in place at friction points within the mechanism to reduce wear.

That latter practice not only requires a skilled hand to place the jewel within the chaton and then the chaton within the plate which is also very labour intensive as holes have to be drilled on the plate for each chaton and the chaton is held by two or three blued screws, an additional hand-made minute detail that requires expertise and time. Notwithstanding this, it is a watchmaking tradition most Glashütte brands continue to this day, and is appreciated by watch lovers for enhancing the aesthetic appearance of a movement. 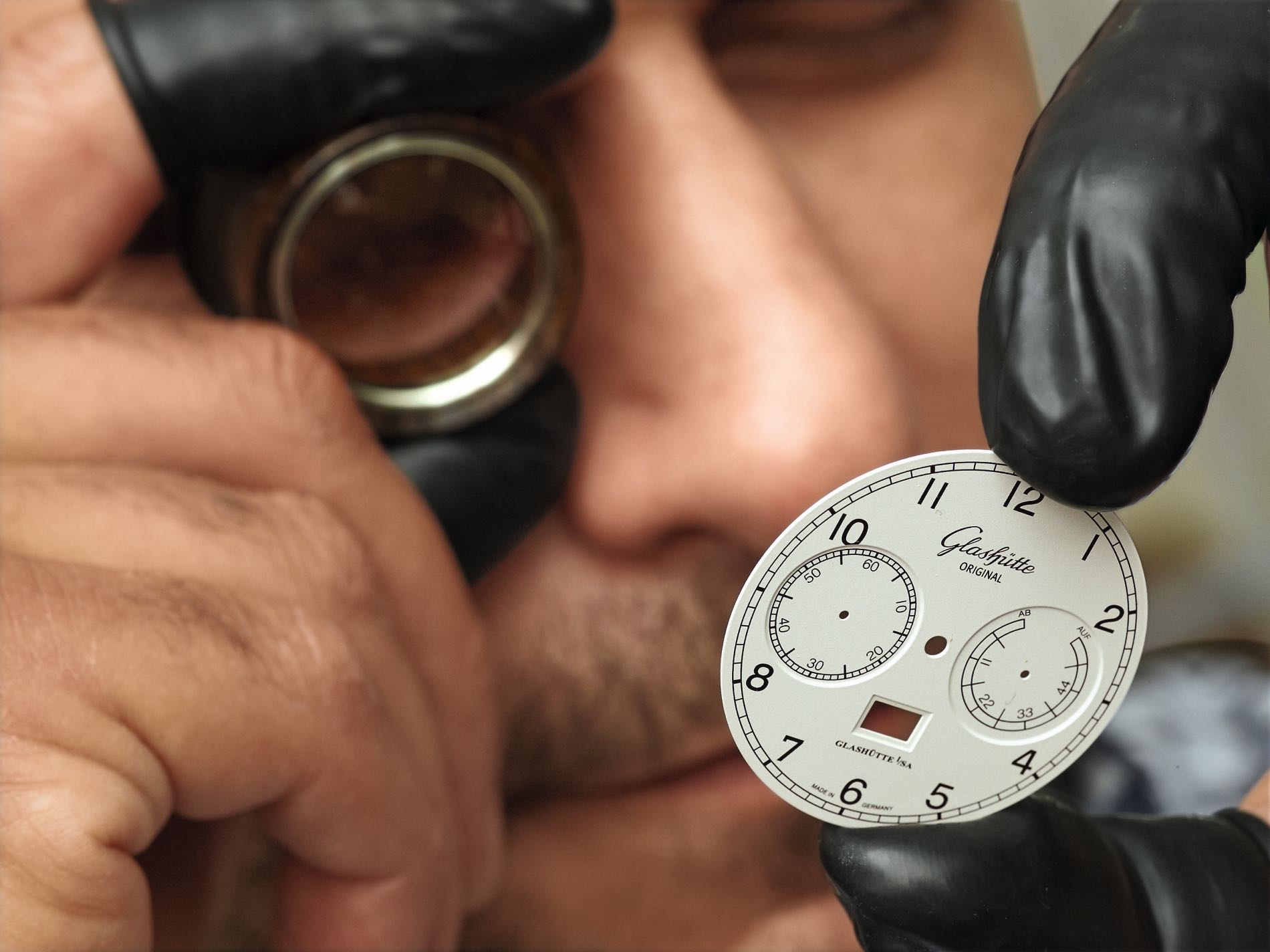 By the early 1900s, Glashütte watches were in such demand that owning one was considered a status symbol and watchmakers in other countries started putting the name of the town on their dials, prompting Glashütte-based brands to register the phrase "Original Glashütte" and put this on their dials to distinguish them.

For all its international recognition and innovations, such as Alfred Helwig's development of the flying tourbillon, the watchmaking industry came close to collapse in the 1920s-1930s after watchmakers ignored advent of the wristwatch, believing it to be just a fad. With the economic pressures of hyperinflation in the Weimar Republic followed soon after by the Great Depression, grand fortunes collapsed and buying expensive pocket watches became a luxury even fewer people could afford, so many watchmakers closed their workshops. Those remaining focused increasingly on producing reliable timekeepers for research and the military. 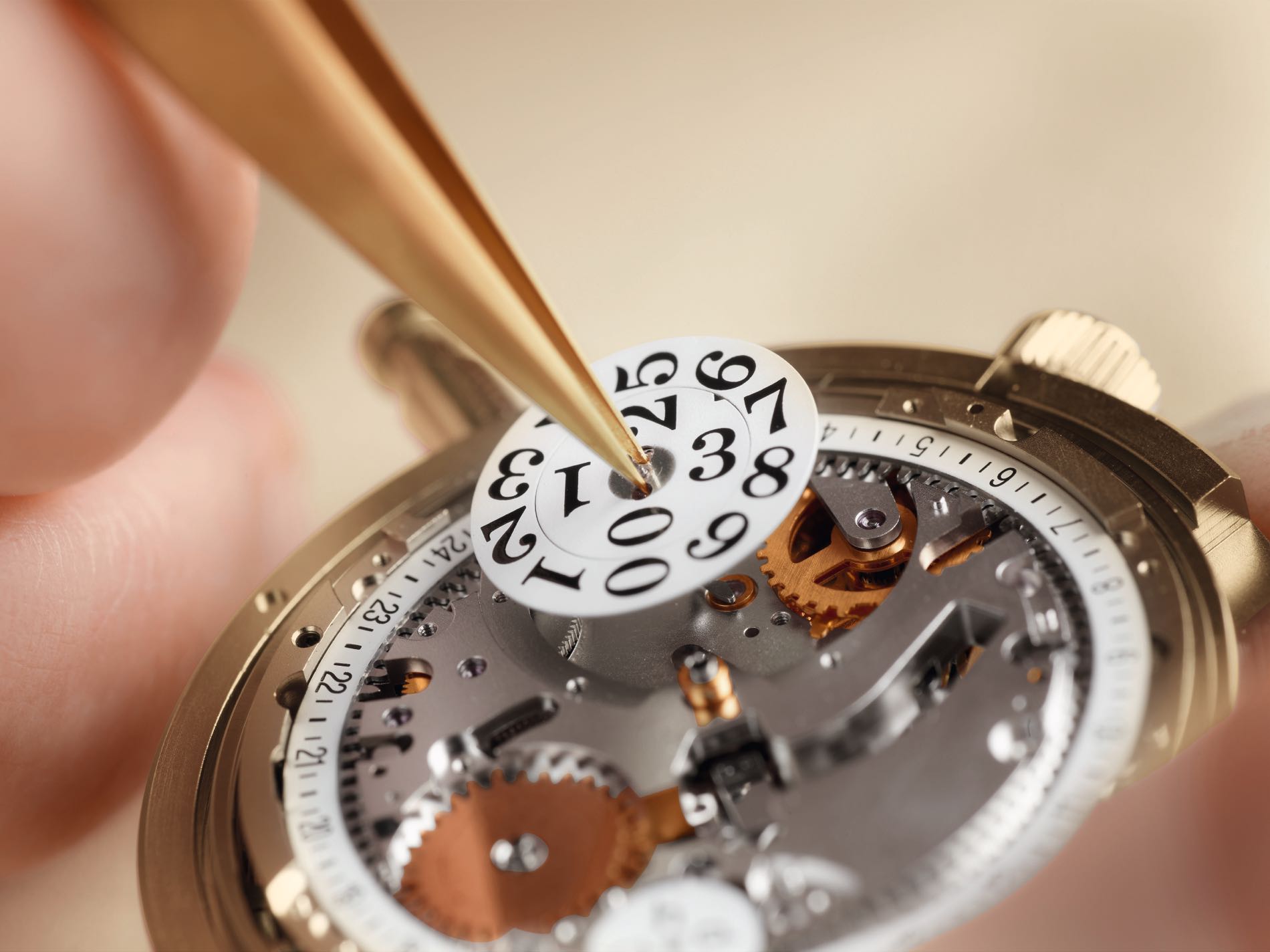 Indeed, during the Second World War, the town produced a large number of watches for military use, as well as timers for weapons. Some precision mechanics and engineers also diversified for example, making mechanical typewriters and calculating machines. While the town largely escaped damage for most of the war — it was bombed by Soviet forces on the very last day — the real damage to its watch industry was inflicted by a double whammy: first, the Russians dismantled most of the town's manufacturing equipment and sent it to Russia, then in 1951, the East German government combined all local watchmakers under the umbrella of the state-owned Glashütter Uhrenbetriebe which started to mass-produce robust, affordable wristwatches, some of which were sold in West Germany under the name Meister-Anker.

With the fall of communism in 1989, the subsequent reunification of Germany brought about another reorganization of Glashütte's watch industry. Lange's great-grandson, Walter Lange, who had gone to West Germany after the Second World War, returned to reclaim his family's name and registered a new company, A Lange & Sohne hiring many of the watchmakers in town. Others followed suit with Mühle-Glashütte, for example, revived by the descendent of its founder. 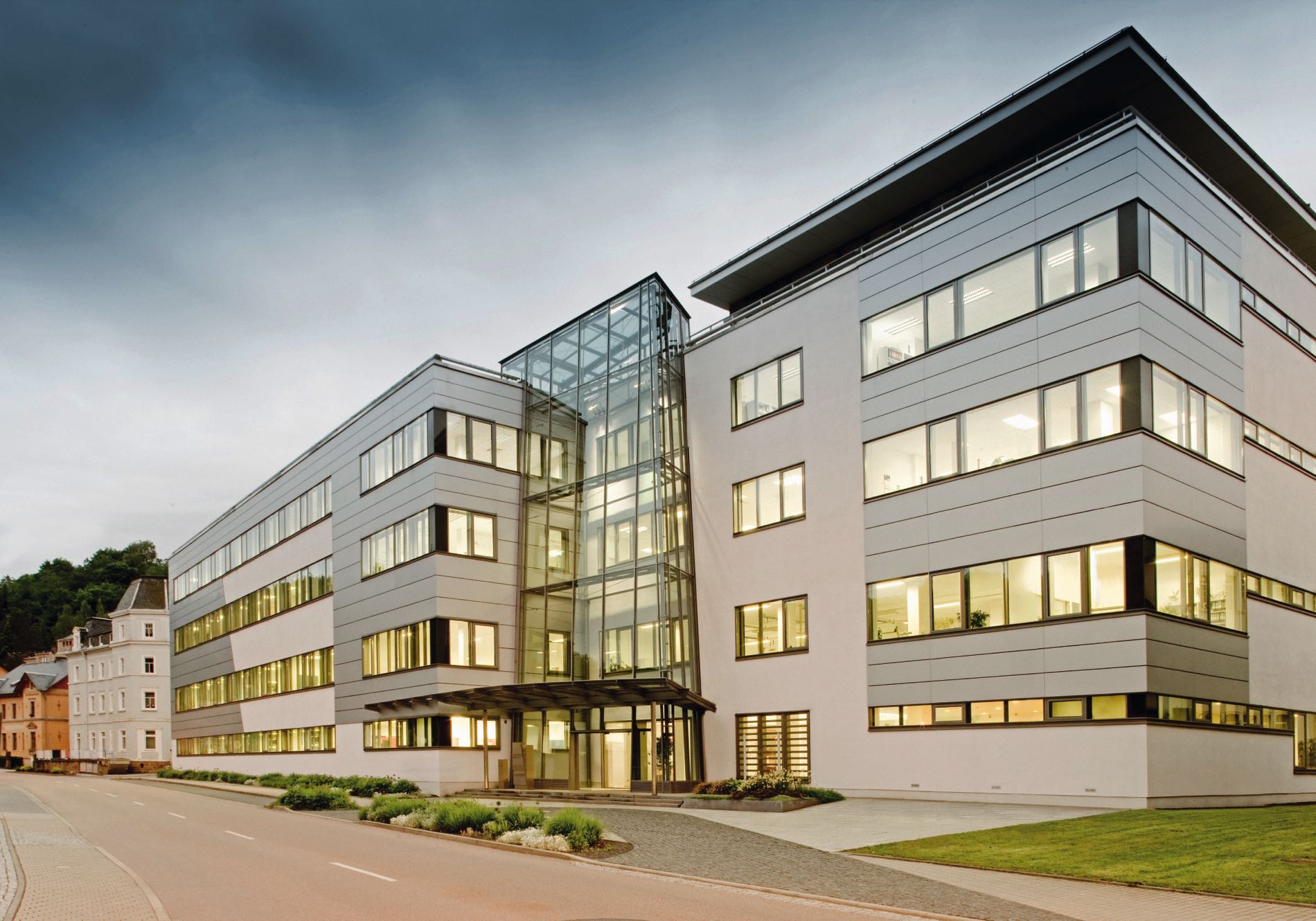 Emerging from the shadow of the cold war, it took nearly 10 years and the vision of two men, Heinz Pfieffer and Nicolas G. Hayek, to revive the Glashütte Original brand. Pfieffer, an entrepreneur, bought Glashütter Uhrenbetriebe in 1994 from Treuhandanstalt, the German government's privatization agency, after a first attempt to privatize it via France Ebauche (a French movement manufacturer) failed. He named it Glashütte Original and immediately set a plan in motion to return its focus to high-end watchmaking. When Hayek, the CEO of Swatch Group bought the company 6 years later, he invested the necessary financial resources to return the company to its respected tradition of self-reliance and dedication to craftsmanship.

While the dials come from its own factory located in Pforzheim, Glashütte Original's manufacturing operations are otherwise under one roof, from developing movements to final assembly and the company is actively grooming the next generation of watchmakers and toolmakers having established the Alfred Helwig School of Watchmaking in the building where the German Watchmaking School Glashütte had been founded in 1878. 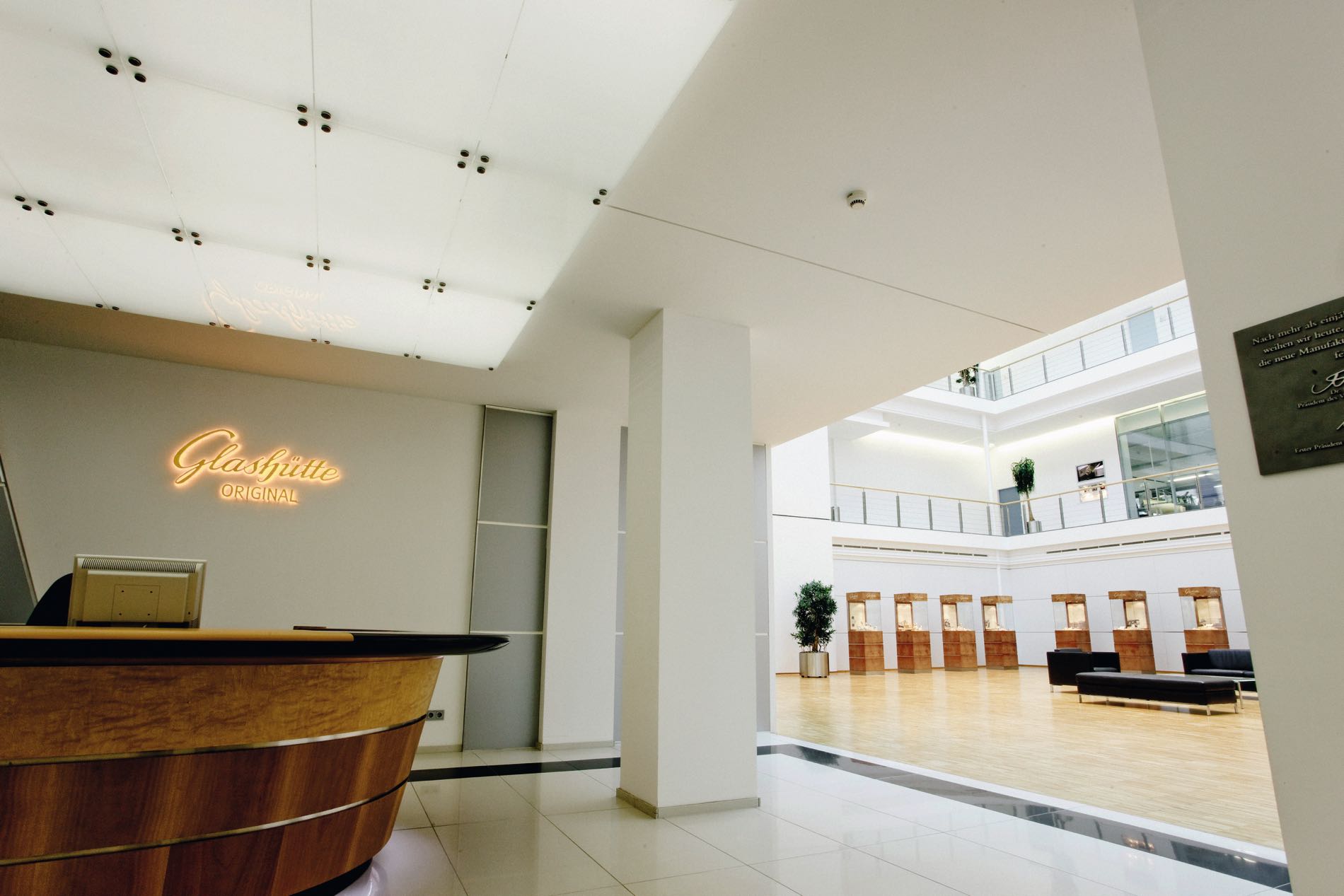 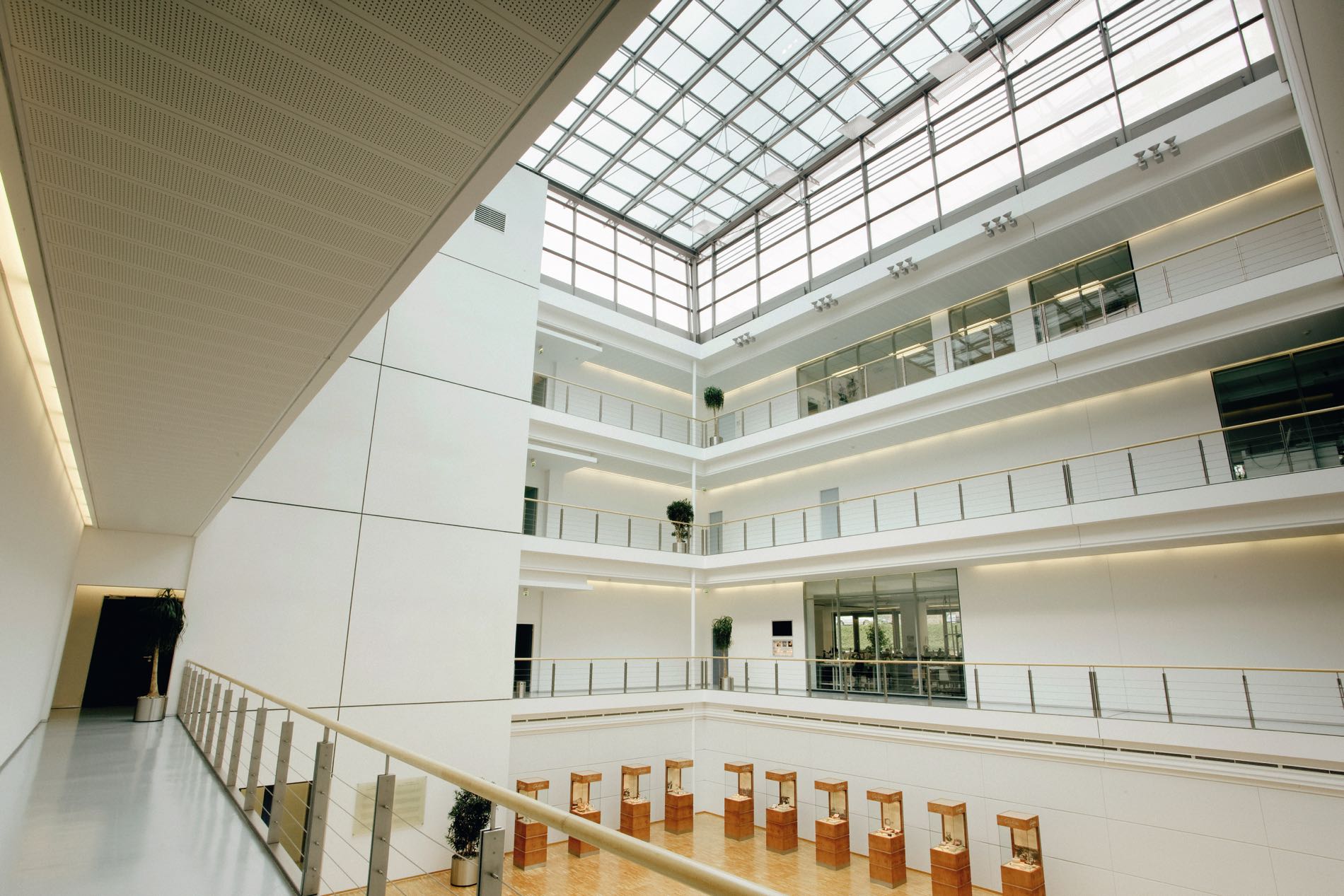 "Timepieces from Glashütte in general represent watchmaking excellence and authentic craftsmanship, a functional, clear and understated design as well as a lavish finish (to) watch components in the tradition of the old masters. During the course of history, our engineers, watchmakers and precision mechanics had to be extremely flexible to continuously adapt to changing political and economic circumstances. So flexibility, a capacity to adapt and innovate and think outside the box are clear strengths," Reichel notes.