The Magnificence and Elegance of the Jaquet Droz Grande Seconde Collection

Outstanding for the avant-garde lines of its design, the Grande Seconde first launched in 2002 was inspired by a pocket watch made in 1784 by Pierre Jaquet-Droz, the brand's namesake founder. As its name suggests, the prominent running seconds display is the timepiece’s main focal point. On the top half of the watch, the hours and minutes are shown on a sub-dial in Roman numerals, overlapped by a larger seconds sub dial displayed in Arabic numerals.

Together the visual forms the hallmark number 8 look of the Grande Seconde, and has been the brand's signature timepiece in the 16 years it has been in modern production.

From classical styles to adornments with exquisite grande complication movements, the Grande Seconde by Jaquet Droz is a watch of magnificence and elegance, understated yet appreciated on the wrist of the refined gentleman.

Four timepieces from the current collection, each executed with different complexity and crafted with unique appeal, typify the Grande Seconde’s design iconography whilst presenting a completely new identity and style. 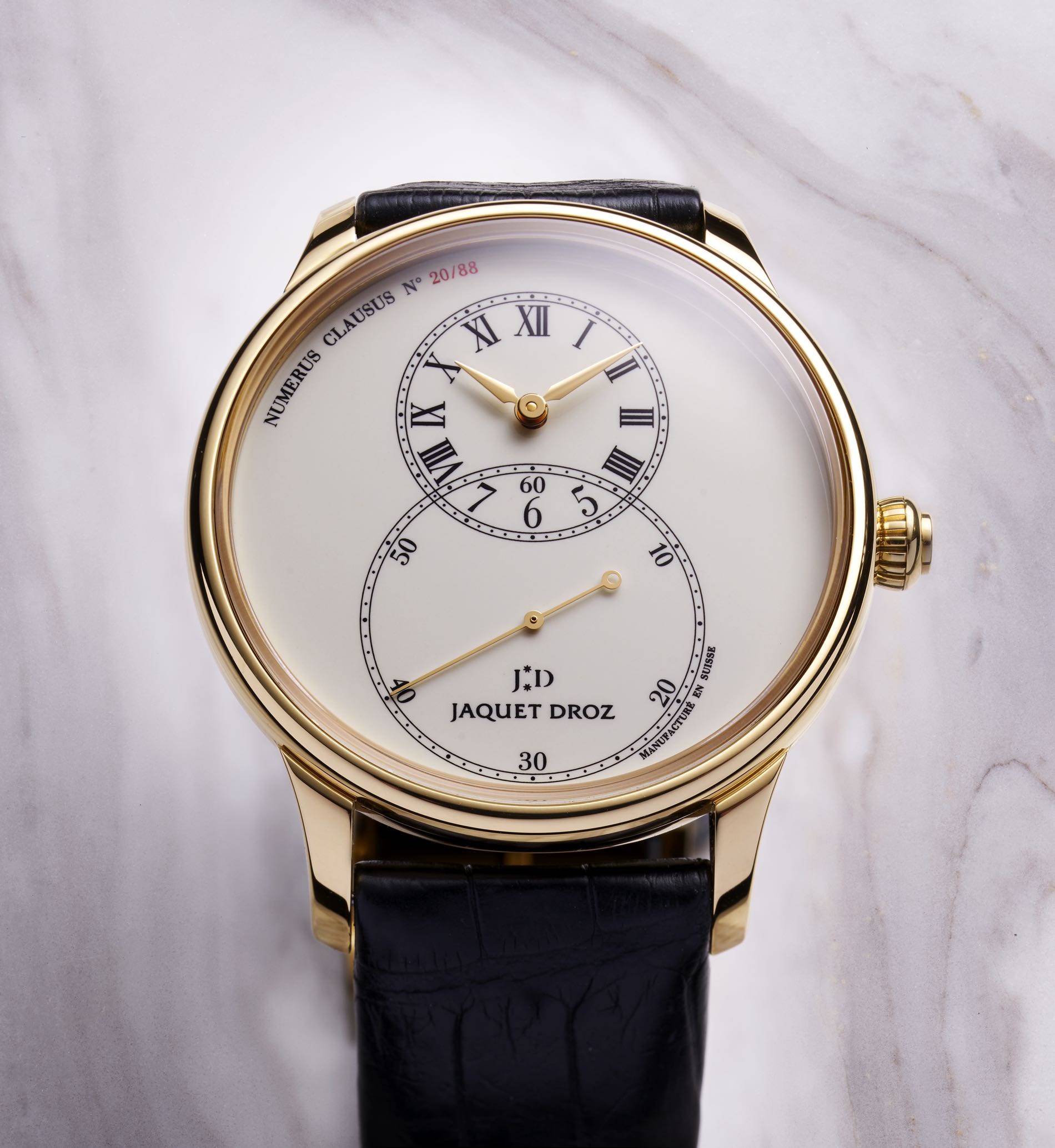 Launched as part of Jaquet Droz’s 280th anniversary this year, the Grande Seconde Tribute is the first wristwatch by Jaquet Droz to be made in 18ct yellow gold. It comes as a limited edition of 88 pieces, with the serial numbering in red enamel indicated at the 10 o’clock position.

The dial is made of Grand Feu enamel, using a technique whereby powdered glass is applied to the dial, then placed into an oven of 800 to 1200 degrees Celsius. Layers are continually applied, and the process is repeated to achieve the desired colour. This centuries-old approach results in a perfectly uniform ivory tone, and a impeccable dial that is impervious to the test of time.

A tribute to the original pocket watch design, the timepiece features the hours and minutes counter at 12 o’clock, with indexes alternating between Roman and Arabic numerals - which when first rolled out, was two centuries “ahead of its time” before it became as commonplace as it is today - for the perfect readability of two dials in line with one another.

The watch is powered by the self-winding (automatic) Caliber 2663, featuring a silicon escapement that is resistant to variations in magnetic fields and temperatures. Viewable from the transparent caseback, the oscillating weight features two decorations specific to the Grande Seconde Tribute. First, it is decorated with traditional hand guilloché. Second, it features the brand’s two symbolic stars. Applied and polished, they represent the Jaquet-Droz father and son, a reminder of the rich heritage and founding history of the Swiss manufacture.

The Jaquet Droz Grande Seconde Tribute has a diameter of 43 mm and 68 hours of power reserve. It comes with a rolled-edge handmade blue alligator strap, and an 18 ct yellow gold ardillon buckle. 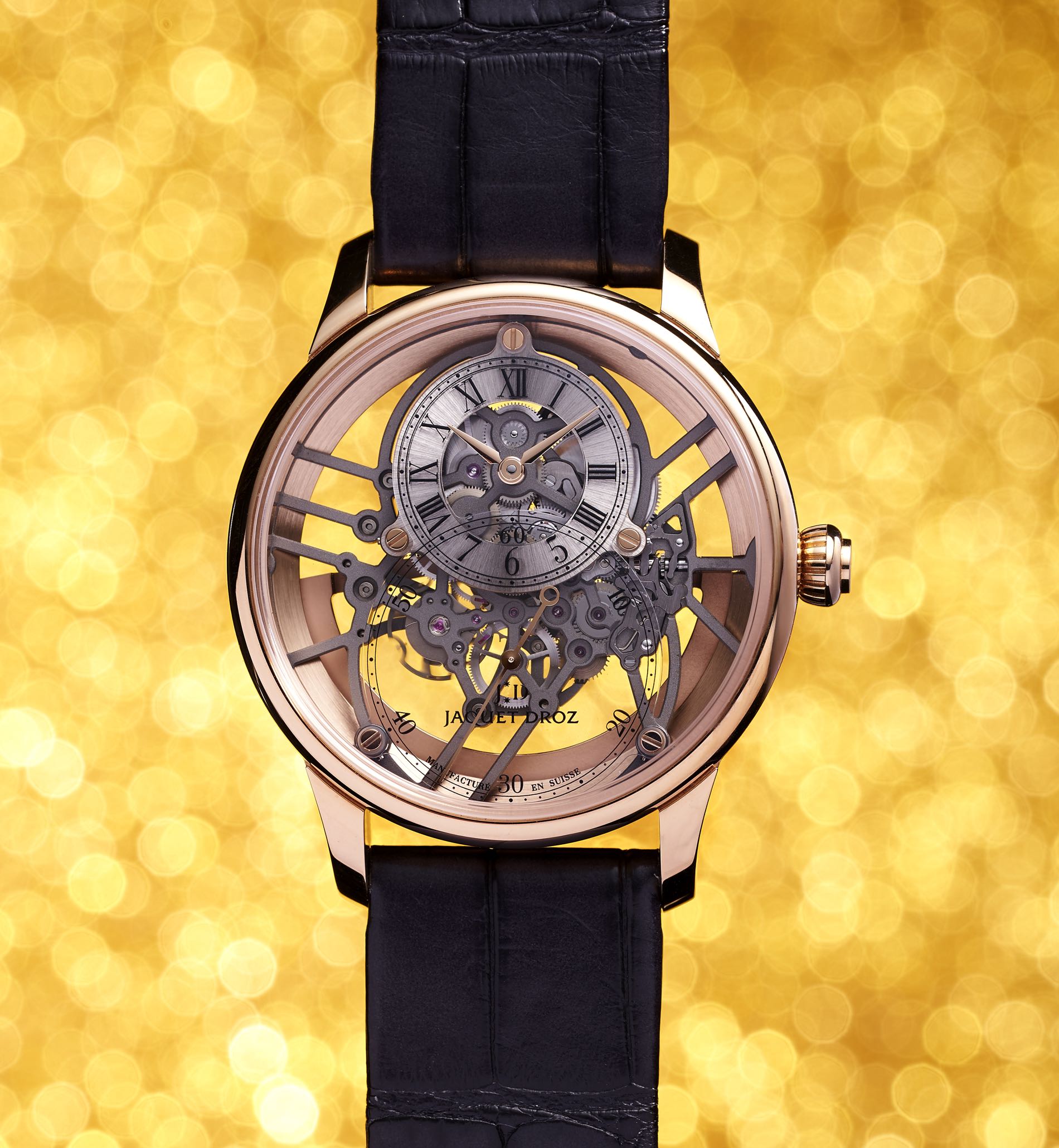 The Grande Seconde Skelet-One represents another first for Jaquet Droz, launched also in celebration of the brand’s 280th anniversary. The new architectural interpretation of this addition to the collection features a sapphire dial integrated within a skeleton composition.

Encased in 18 ct red gold, the Skelet-One allows a view into the inner workings of the timepiece with the escapement and gears in full display, whilst maintaining the distinctive silhouette of the number signature number “8” on the dial. Staying true to the original inspiration of the Grande Seconde, the Skelet-One also boasts an uncluttered dial, adorned with the legendary hours and minutes counter with Roman numerals at 12 o’clock, intertwined with the large seconds counter with Arabic numerals at 6 o’clock.

Inside, the skeleton movement is constructed in successive layers, and can be viewed from the side. The base plate is now entirely openworked while the casing-up circle has been eliminated. At 12 o’clock, the hours and minutes turn around a sapphire hour ring, set on a base of gold. The ensemble is held together by five indexed screws, oriented in a chosen direction. Used for the first time by Jaquet Droz, this procedure was derived from an existing armory system and adapted by the brand’s technical teams. The oscillating weight in 18 ct red gold, seen from the transparent caseback, has also been openworked to let light diffuse freely into the heart of the movement.

The watch is powered by the hand-assembled Caliber 2663 SQ, equipped with a silicon double barrel, balance spring and pallet lugs. It is the first to reveal the mechanical choreography beating at the heart of the Grande Seconde, and represents a new transparent aesthetic bathed in light.

The Jaquet Droz Grande Seconde Skelet-One has a diameter of 41 mm and 68 hours of power reserve. It comes with a rolled-edge handmade black alligator strap, and an 18 ct red gold ardillon buckle. It is also available in 18 ct white gold, or ceramic. 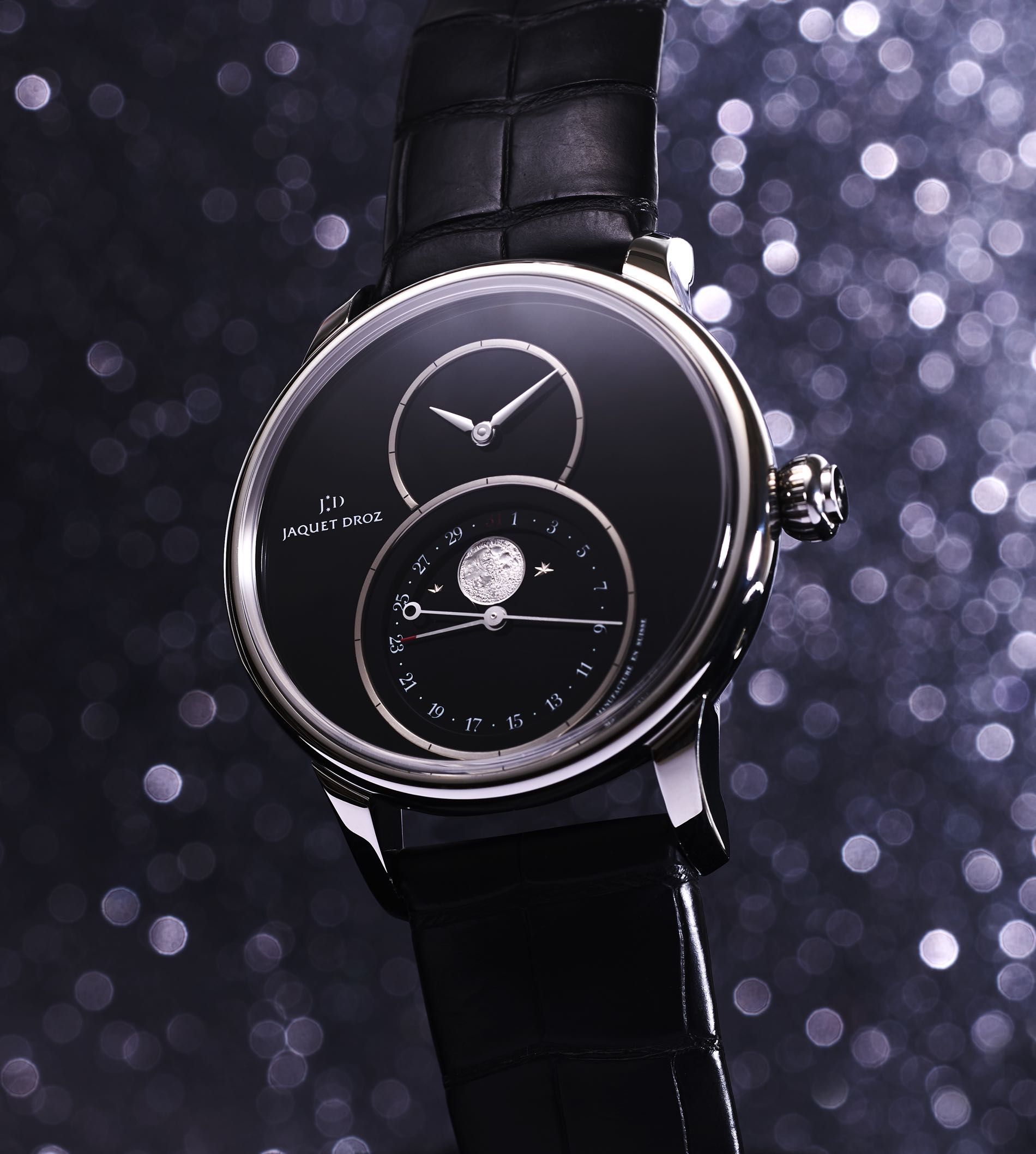 Available exclusively only at Jaquet Droz and Tourbillon boutiques, the Grande Seconde Moon Onyx in a stainless steel case represents the coming together of the day-to-day practicality of precise hour, minute, seconds and date displays alongside the poetry of a moon phase.

The top dial has the indices for the hours while the second larger sub dial is now made up of two concentric rings. The outer ring is the signature printed Arabic numerals for the seconds hand. Further in, the second inner ring has numbers from one to thirty-one printed on it for the date. The pièce de resistance is the moon phase, which is shown through a cut-out in the middle of the dial. The moon disc is made of black onyx, with the star and moon appliques in 18-karat white gold and 22-karat white gold, respectively.

The watch is powered by the Caliber 2660 QL3, with a silicon escapement. Its Moon Phase complication is an in-house developed movement that needs only be adjusted by one day every 122 years, a massive upgrade over a traditional 59-tooth movement accumulates an error of one day every 2 years and 8 months. It is an impressive demonstration of Jaquet Droz’s pursuit of precision and accuracy, complemented by a romantic reference to the Moon, the favorite celestial body of watchmakers.

The Jaquet Droz Grande Seconde Moon Onyx has a diameter of 43 mm and 68 hours of power reserve. It comes with a rolled-edge handmade black alligator strap, and a stainless steel folding clasp. 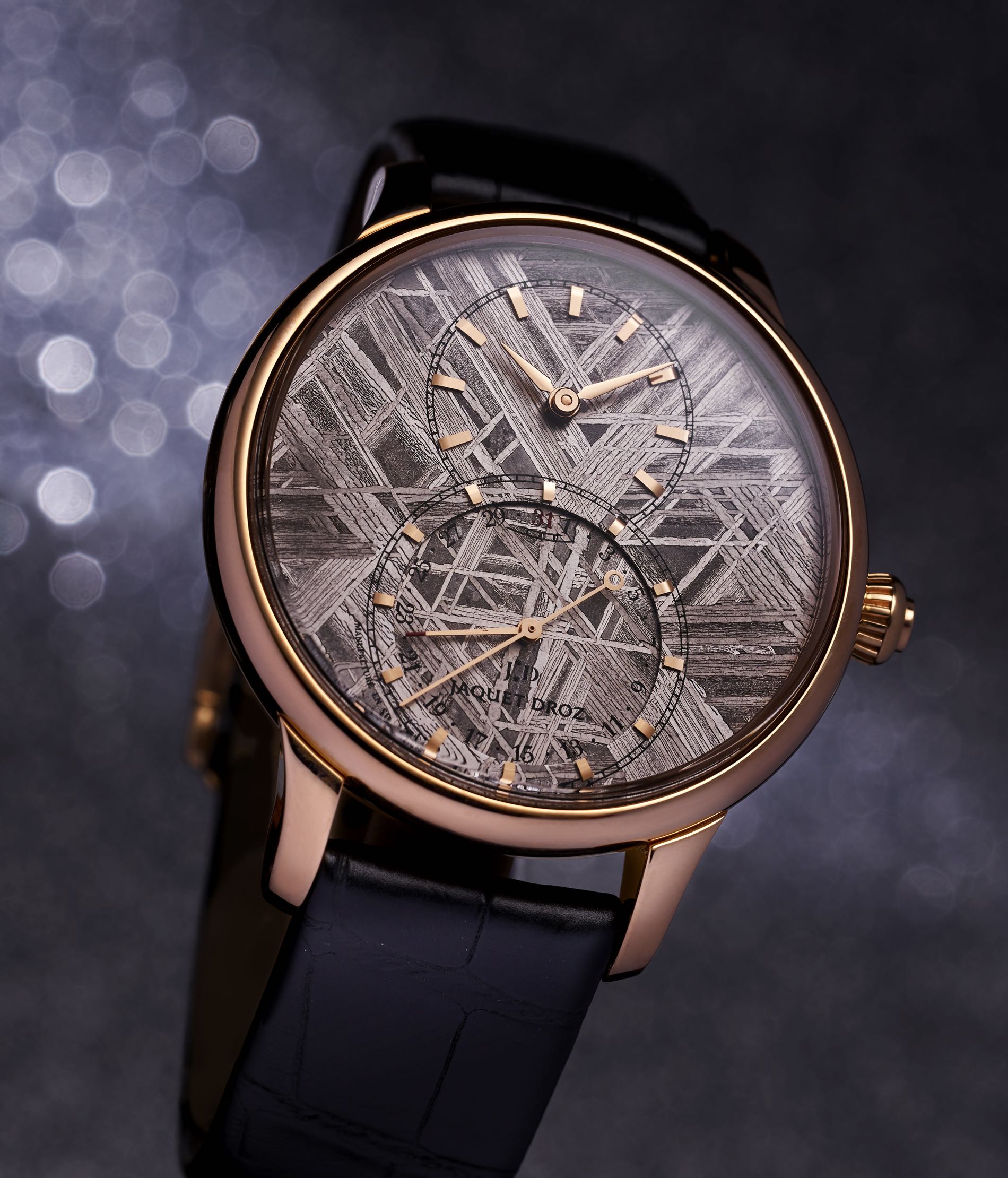 Available exclusively only at Jaquet Droz and Tourbillon boutiques, the Grande Seconde Quantieme Meteorite in an 18 ct red gold case is part of an 88-piece limited edition, an exclusive supply that underscores the exceptional uniqueness of each timepiece.

The Muonionalusta meteorite of which the dial is made of, is more than four billion years old. After a celestial collision, the ferrous mineral spent hundreds of thousands of years journeying throughout the asteroid belt located between the orbits of Jupiter and Mars, undergoing crystallization in space, before falling to Earth approximately 800,000 years ago. Having then subsequently undergone four ice ages on our planet, the Muonionalusta is renowned for its magnificent Widmanstätten patterns, giving each stone its inimitable character. It was discovered only in 1906 by two children near the banks of a river, from which it received its name.

A complex process is then performed by the watchmakers at Jaquet Droz, with the color and the cut of the dial as well as engravings all specific to each of the watches in this collection. A timepiece that exemplifies the craftsmanship of Jaquet Droz’s proud 280 year history, the Quantieme Meteorite is also a haunting seduction with an otherworldly grace.

The Jaquet Droz Grande Quantieme Meteorite has a diameter of 43 mm and 68 hours of power reserve. It comes with a rolled-edge handmade black alligator strap, and an 18 ct red gold ardillon buckle.