Lagerfeld Juxtaposes Past and Future with CHANEL Haute Couture | SENATUS

Lagerfeld Juxtaposes Past and Future with CHANEL Haute Couture

The CHANEL Haute Couture Week presentation brought guests from the past, and theatrically into the future with a collection that brings out the best from the Old World and the New.

Karl Lagerfeld, who celebrates thirty years as the Creative Director of CHANEL, whilst the label itself also reaches its centenary of existence from the humble beginnings of a boutique in the seaside town of Deauville in the South of France, once again thrilled guests with a spectatorial experience for the French luxury label's Haute Couture Week presentation of its Fall/Winter 2013/2014 collection.

The production set specially created within the belly of the Grand Palais in Paris for the Haute Couture showcase consisted of a grand theater reminiscent of a post-WWI scene in the 1940's, eroded and destroyed by the vestiges of time, with an interior stripped of paint and cracked, littered by broken planks off the main stage and concrete rubble off the broken ceilings, brought to mind a sense of nostalgia.

Celebrities, VIPs, media and invited guests sat in three columns of rowed wooden seats and tiered galleries on either side, waiting with bated breath as the show begun. In contrast, the visuals that were projected on the front viewing wall, revealed as the tattered and aged velvety curtains parted, was that of a futuristic metropolis, thus setting the tone and theme of Lagerfeld's interpretation of couture for the upcoming season.

Fashion is the only thing that can travel ... from the old world to the new

And that was exactly what Lagerfeld (said and) delivered. The first looks in the collection adorned by models who emerged from the stage and proceeded to weave through the aisles in pairs, showed a selection of classic A-line woolen or tweed-style skirt suit-styles paired with futuristic square-topped hair tied-back coifs, with some embellished with similar square-brimmed hats containing silver embroideries, pinned to the back of the head. A consistent accessory seen on the models was a wide belt-band across the hip, with a thin rectangular buckle and metal strips looking like belt loops. For footwear, Lagerfeld presented thigh-high suede "stocking shoes," attached up the leg with a garter, much like those seen on lingerie.

Jackets had strong shoulders, but retained its femininity with tighter sleeves (some cropped) whilst skirts were layered or had layered hemlines to produce a distinct staggered sashay. Materials seen on the designs including wovens, sheers and sequins, colored in a palette of mostly grey, black and white, as well as metallic threads. Funnel necks, cropped jackets, and coats which are the must have item for the season. Evening wear included coats with unique draping, colors and layers whilst dresses shimmered in silver, glitter or sheer metallic fabric, with some displaying geometric prints. The finale "bride" look was the pure-white intepretation of the collection, with a diaphanous white train. Rihanna and Kristen Stewart in attendance. Rihanna wore a show-stopping long white Chanel sweater-like one-piece design that was unbuttoned low and split to the thigh, and topped off the look with Chanel jewelry of pearls and two-toned pumps. 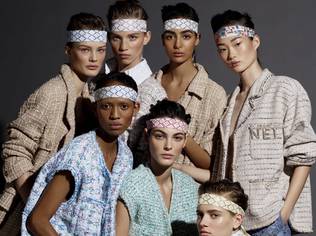 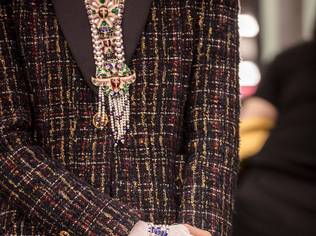 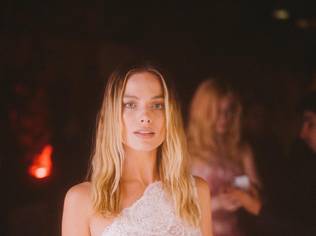 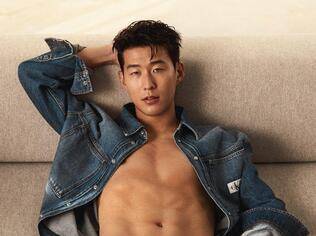