MB&F’s Max Busser on the HM9, "When I say it took us three to four years, it actually took us 13 years to come up with something like that." | SENATUS

MB&F’s Max Busser on the HM9, "When I say it took us three to four years, it actually took us 13 years to come up with something like that."

Text by Kien Lee | Photos of Max by Lightspade Studio

If in the past ten years or so, you’ve been on the market for an independent watch brand, then MB&F would have been on the top of your list. It is a brand whose products are coveted by many, owned by the few.

For those who have only just begun this journey, then the story of how MB&F came to launch its latest creation, the Horological Machine No. 9 "Flow" provides a perfect snapshot and look into how this creative outfit has carved an industry-leading name for itself in the world of horology.

Founded in 2005 by Maximilian Busser who decided to ditch his corporate suit behind, MB&F has billed itself as an "artistic concept laboratory" working on the approach that it would rally and enfranchise collectives of independent watchmaking professionals to join it to develop radical timepieces, be it the Horological Machines, or Legacy Machines. Its underlying principle was to respect the traditions of watchmaking, but never be constrained by them, and in doing so, produce three-dimensional kinetic sculptures, works of art adorned on the wrist.

2018 caps off a magnificent year for the Swiss label, with Max being conferred the Prix Gaïa, an honorary award in watchmaking, established since 1993 by the Musée international d'horlogerie in La Chaux-de-Fonds. These accolades honour special achievements in watchmaking and has often been described as the equivalent of the "Nobel Prize of watchmaking". Max was honoured in the Entrepreneurship category, and fêted for his creative approach to watchmaking applied both in the design of products and in their marketing as well as in the innovative management of his company.

On the company front, the Legacy Machine Perpetual garnered the Calendar Watch prize at the 2016 Grand Prix d'Horlogerie de Geneve (GPHG), while the Legacy Machine No. 1 scored double wins with the Men's Watch prize along with the Public Prize in 2012, adding to Horological Machine No. 4 Thunderbolt walking home as 2010’s Best Concept and Design watch. The GPHG would be the equivalent to the "Oscars of watchmaking,” and from a product perspective, the epitome in the industry.

These achievements over the past 13 years represent a culmination of a lifelong passion to create something unique, something never done before, to flip something around, inject new life, aesthetic and energy and turn it into something entirely new, yet nostalgic. It is this inimitable formula that has endeared MB&F to its collectors and admirers worldwide. 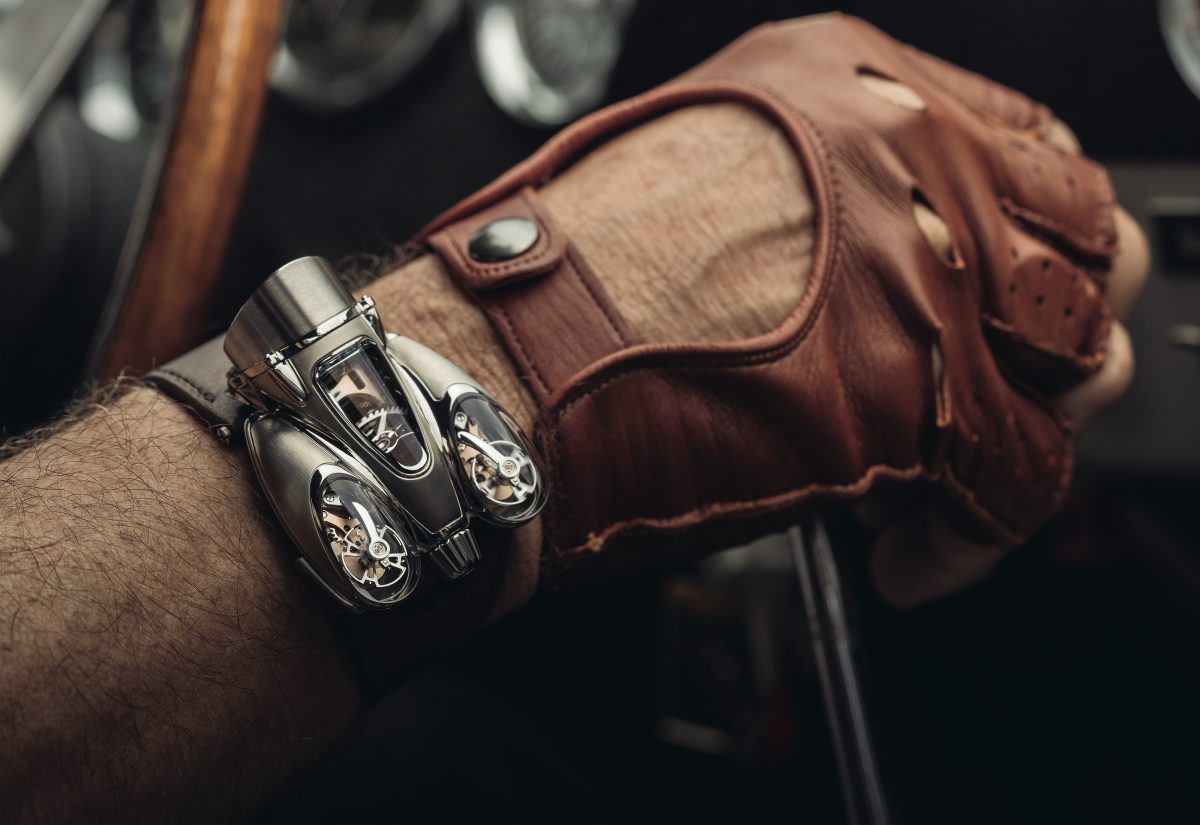 Inspired by the dynamic profiles of automotive and aviation mid-century design, HM9 Flow with its curvilinear silhouette, boasts a geometrically complex combination of milled sapphire crystal and titanium case elements. Reminiscent of a jet engine, and hence the name 'Flow', a manual-winding movement developed fully in-house sits inside. Twin balance wheels beat independently on each "fuselage", while the central body contains a planetary differential that averages the output of both balances to provide one stable reading of the time. 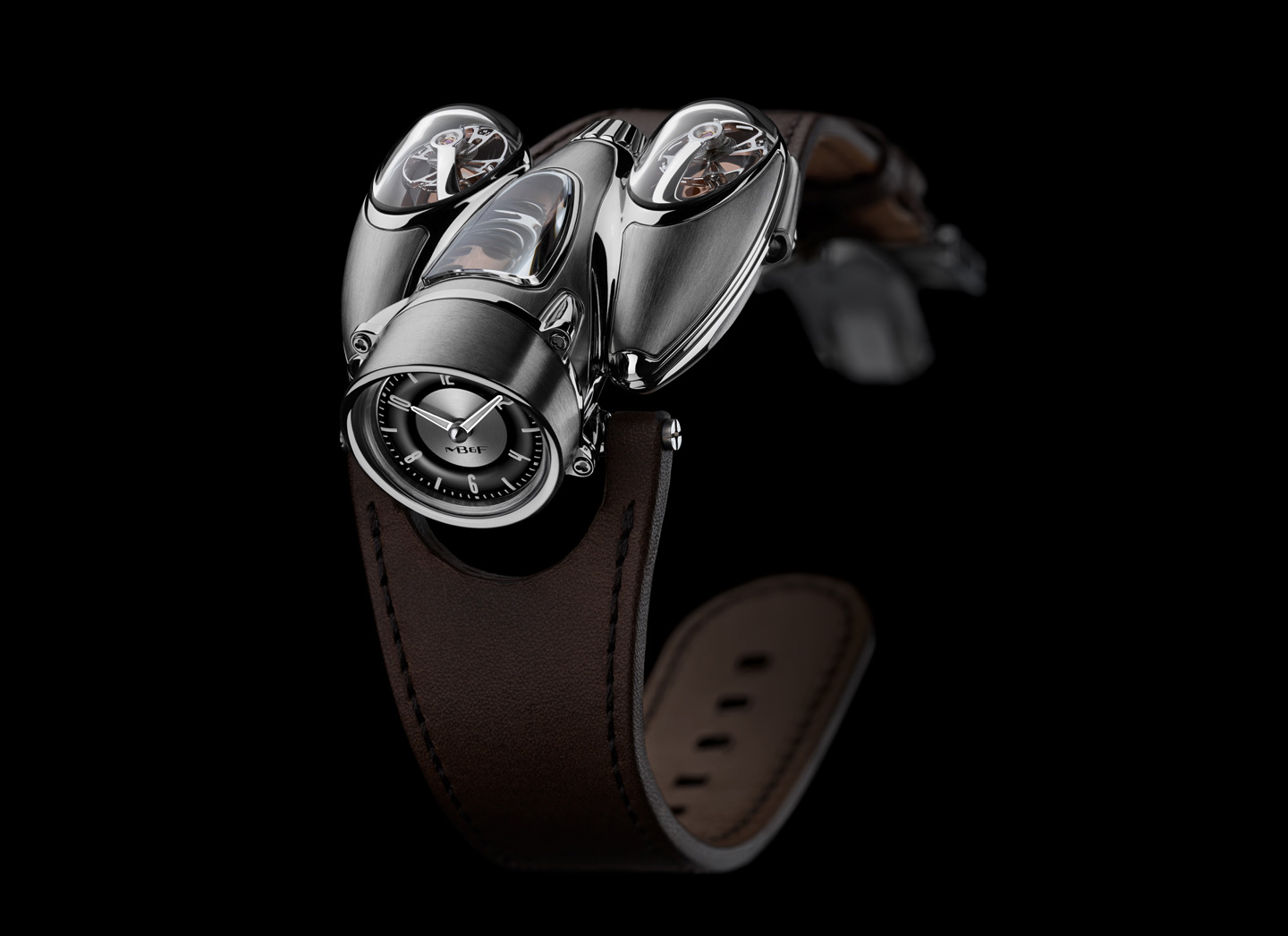 The latest creation builds on the know-how from previous Machines created by MB&F. Firstly, the two fully independent balance wheels and the planetary differential, which was first seen on the Legacy Machine No.2. 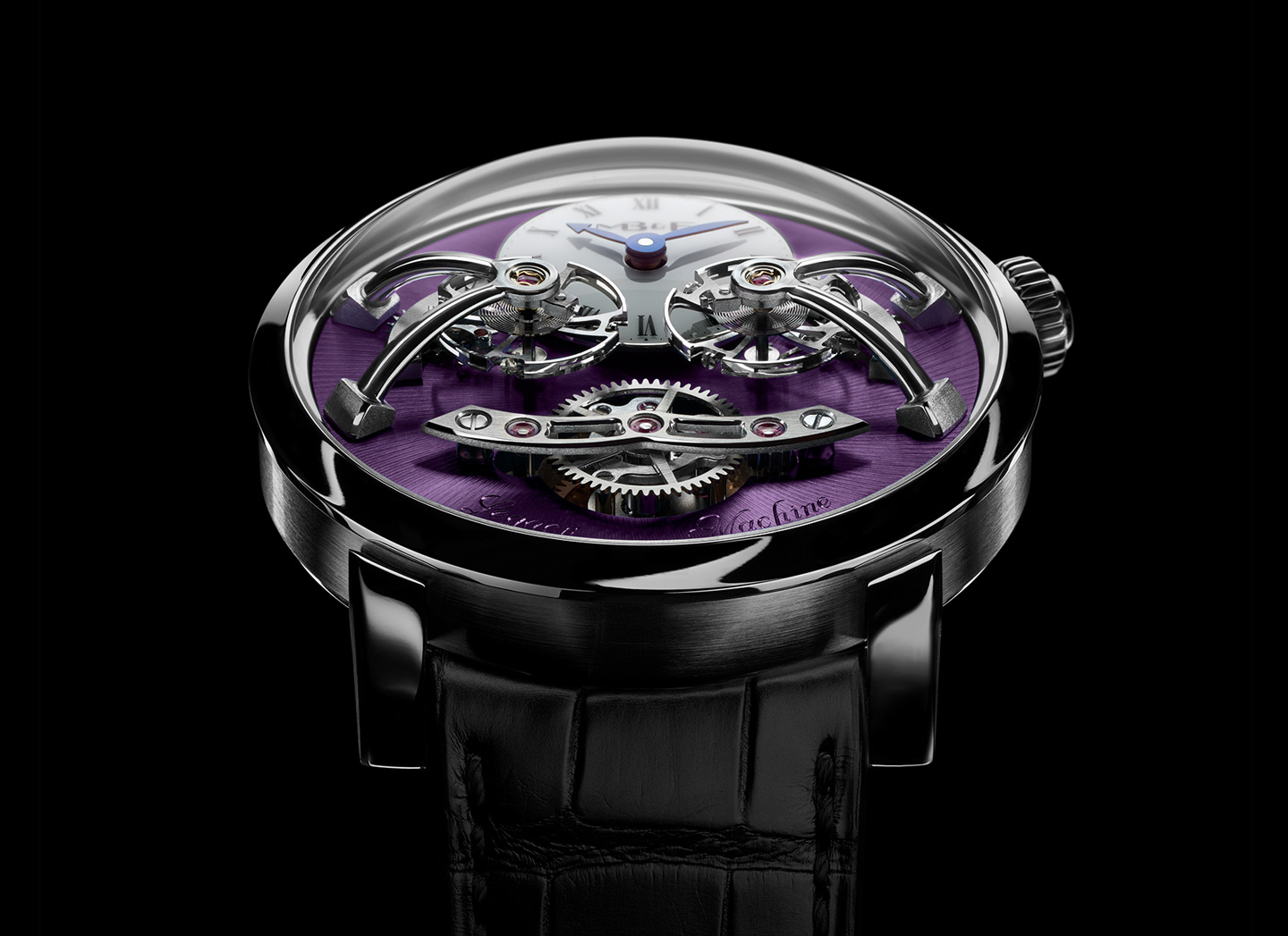 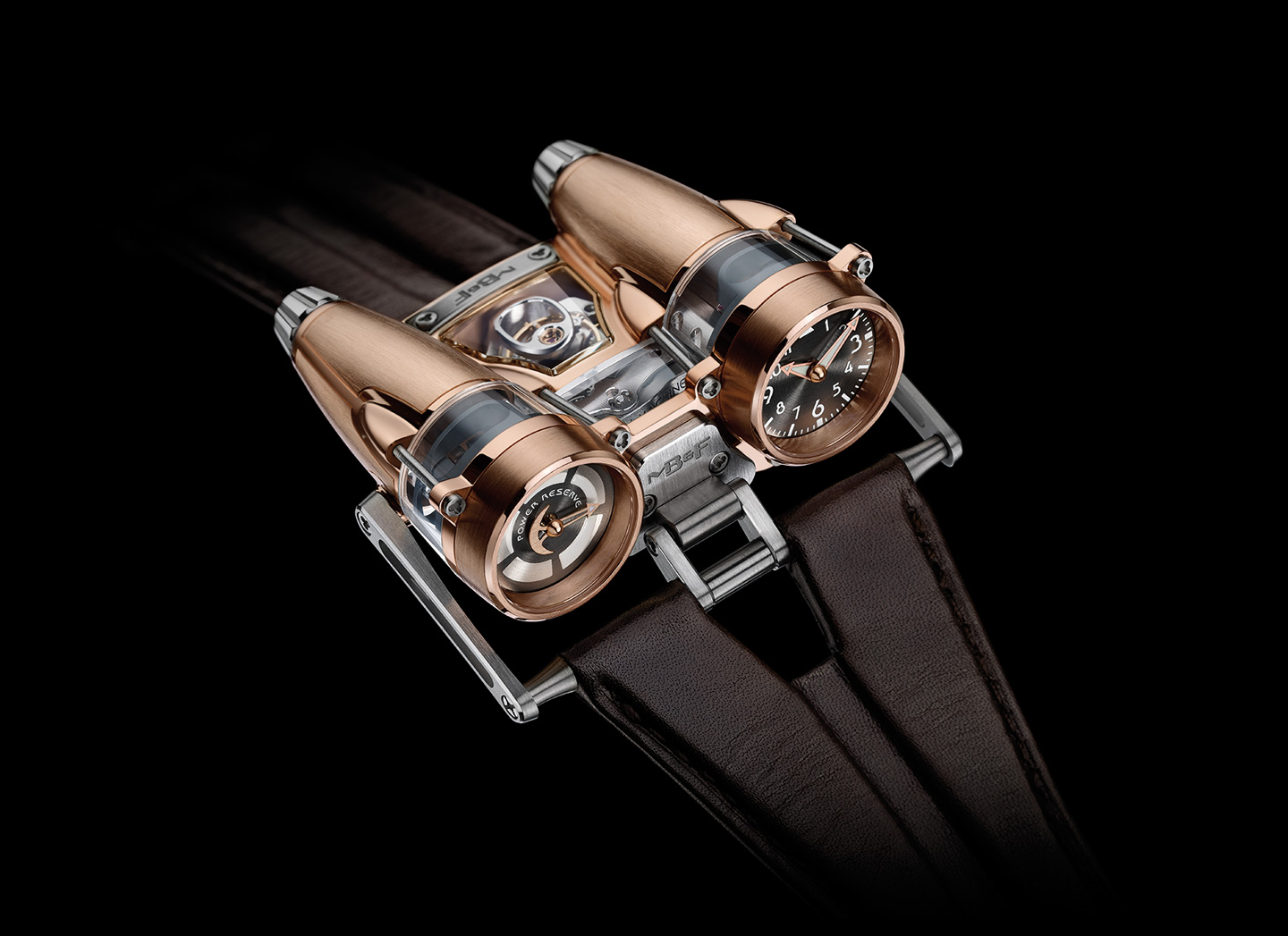 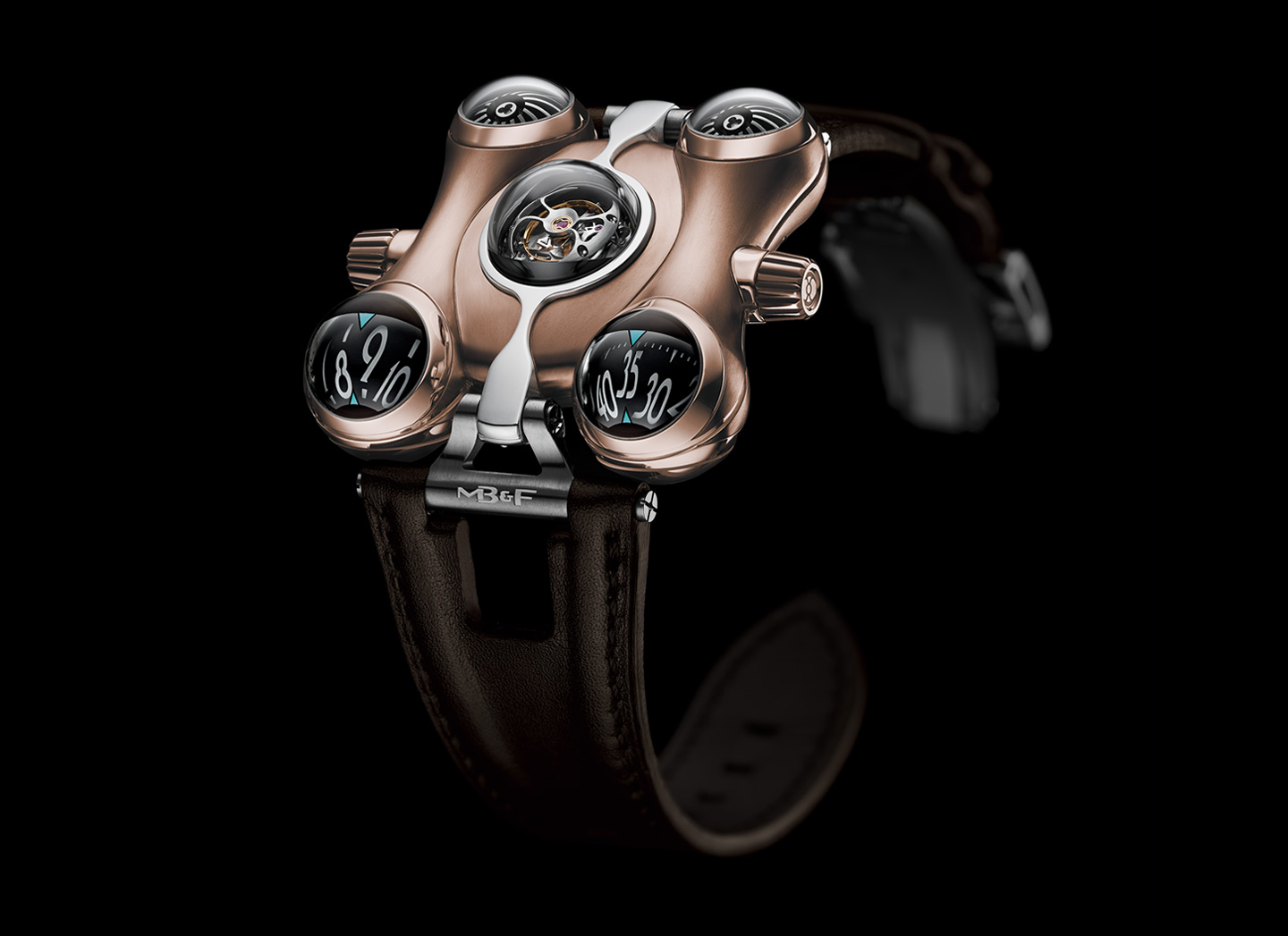 It is simply put, a completely complex way to tell time as accurately as possible - afterall the point of mechanical ingenuity - and the extravagance a showcase of watchmaking excellence. 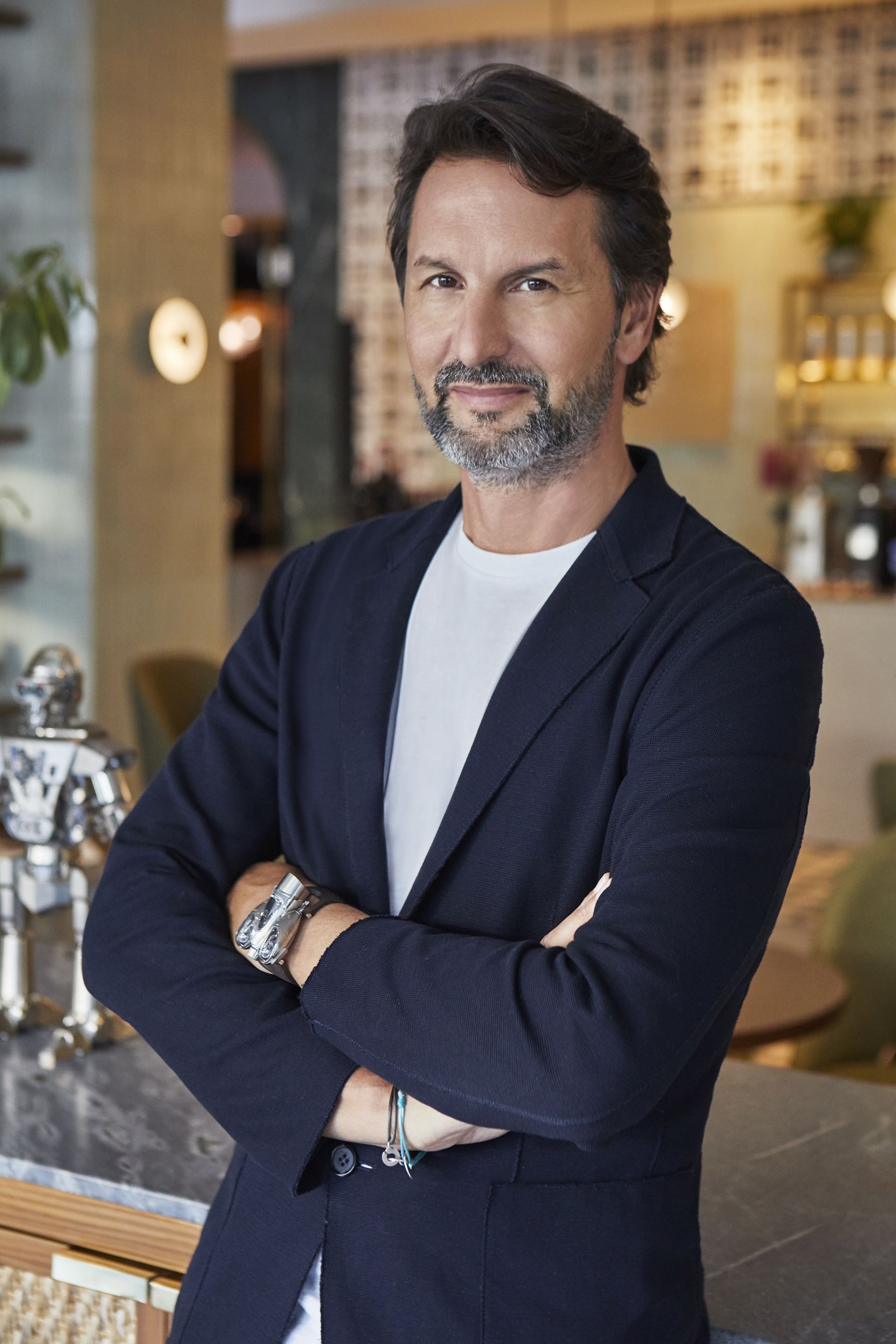 It Really Took Much Longer Than That

In Singapore at the tail end of 2018 to reveal the HM9, Max explains, "Every one of our creations is a three to four year process. I remember sketching this piece about four years ago..."

"This case was amongst if not the most complicated case we've created. First of all, because it has to look completely seamless. So imagine that this is made up of three big blocks of titanium and that we've machined them with 3D mills in five axes, to produce this incredible shape, inside and outside."

"We had to create the first ever 3D water-resistant gasket which we actually patented, which nobody had ever done. Without everything we'd created before, we would have never been able to create the HM9."

"I think if you're a traditional watchmaker today who's [only ever] created round watches, there is no way you could create something like this. We were actually able to do this because [over the last] 13 years, we had come out with the HM4 Thunderbolt, HM6 Space Pirate. We had [to overcome] so many difficult tasks of understanding three-dimensional watchmaking, which then allowed us to come out with it."

"So when I say it took us three to four years, it actually took us 13 years to come [up with] something like that." 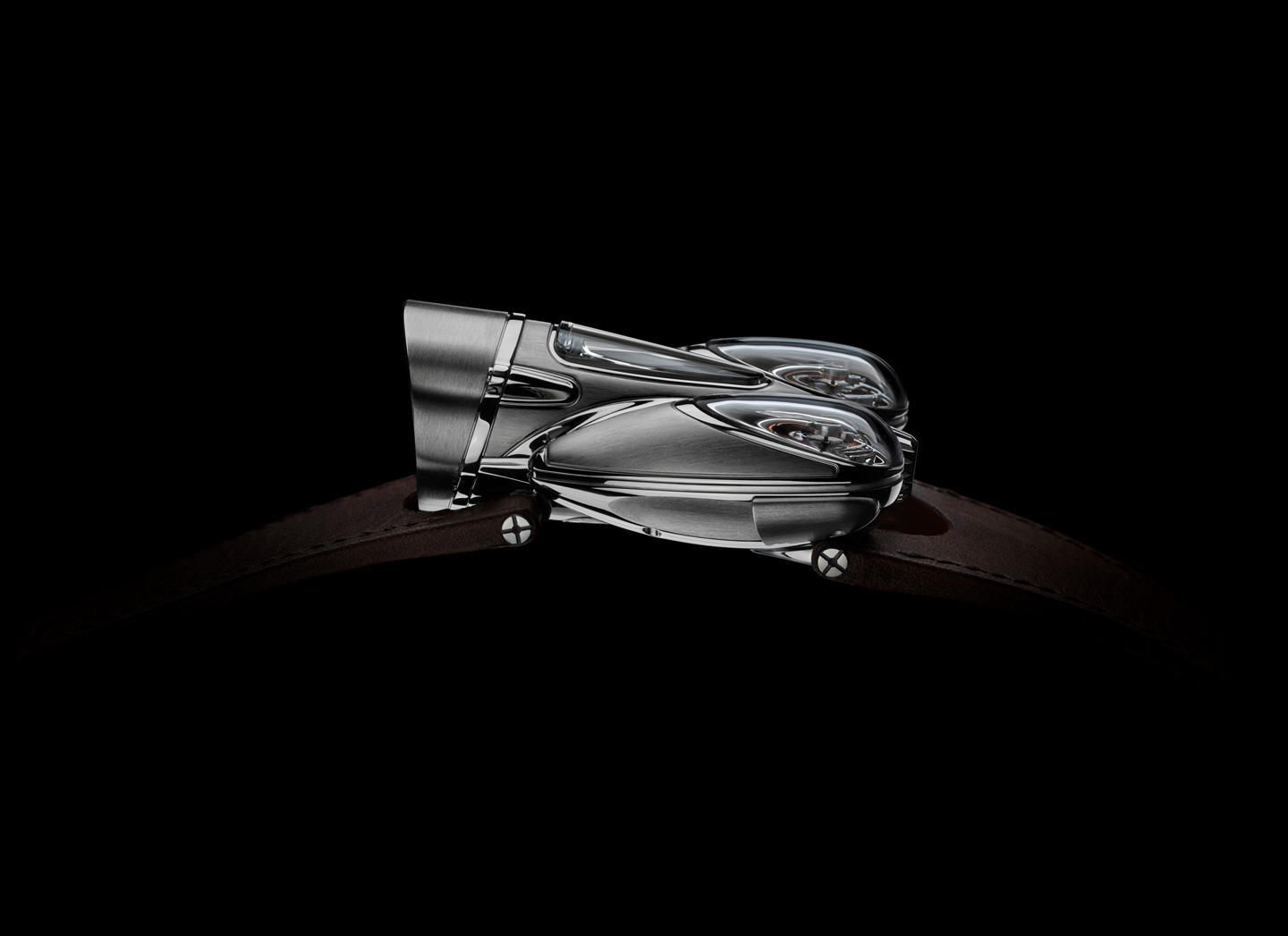 "The whole idea of HM9 is based from a time where engineers were artists. [Back then], there were no wind tunnels to tell you that whatever car or plane you were designing was actually efficient. So you would design something you thought would go fast and therefore you would actually design something which would look fast."

"If you look at some of the late 40s, early 50s sports cars or planes they, they were incredibly more imaginative than what came up later because they had no technical restrictions to tell them, 'No, that's not gonna have the right air drag or whatever it is'."

"That's something I lacked a lot in my studies as an engineer. We never spoke about beauty, we never talked about humanity and when you go back and look at the archives of those great creators of the 30's, 40's and 50's, you realize that's all they were looking for.” 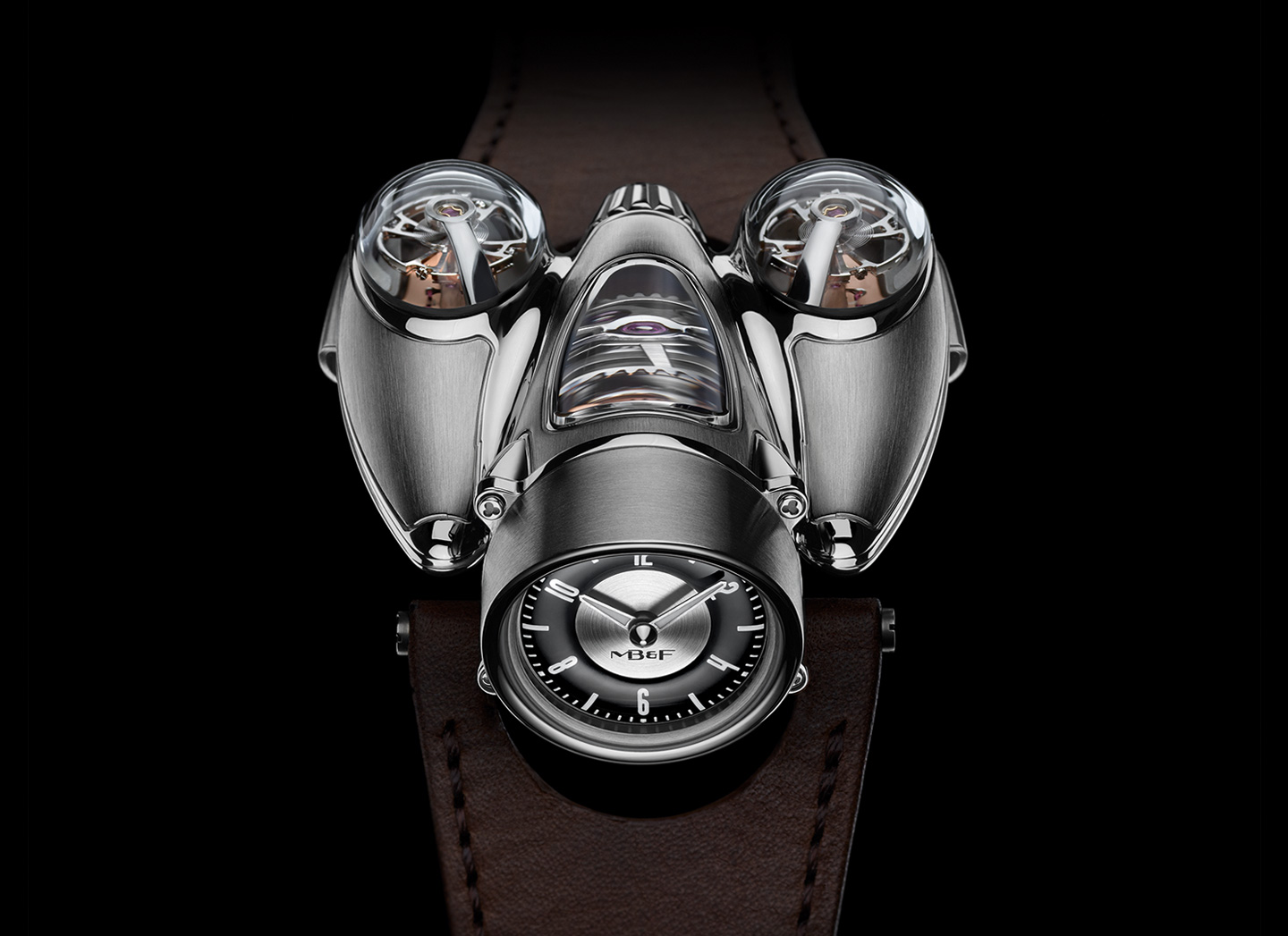 A Tribute to One of the Greatest Watchmakers Alive

"The HM9 movement is a is a tribute to one of the greatest watchmakers alive called Philippe Dufour. Philippe created in 1996, the Duality, the first-ever wristwatch with two balanced wheels and a differential."

"The first time I had a Duality in my hand and I turned it round and I saw those two balance wheels. It was in probably 1999, [almost] 20 years ago, and I remember thinking 'wow, if I created something that has two balance wheels I would want to see them'." 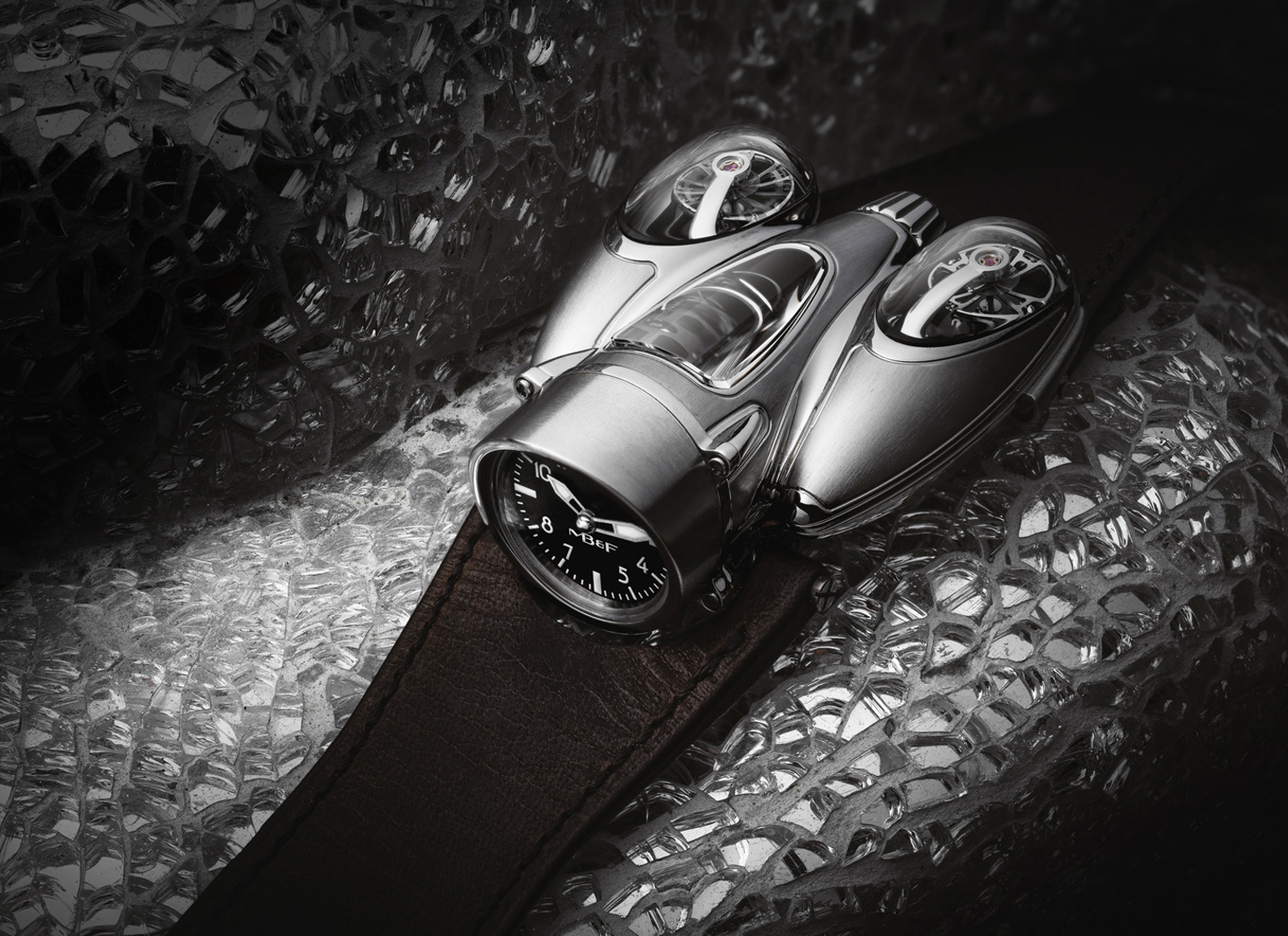 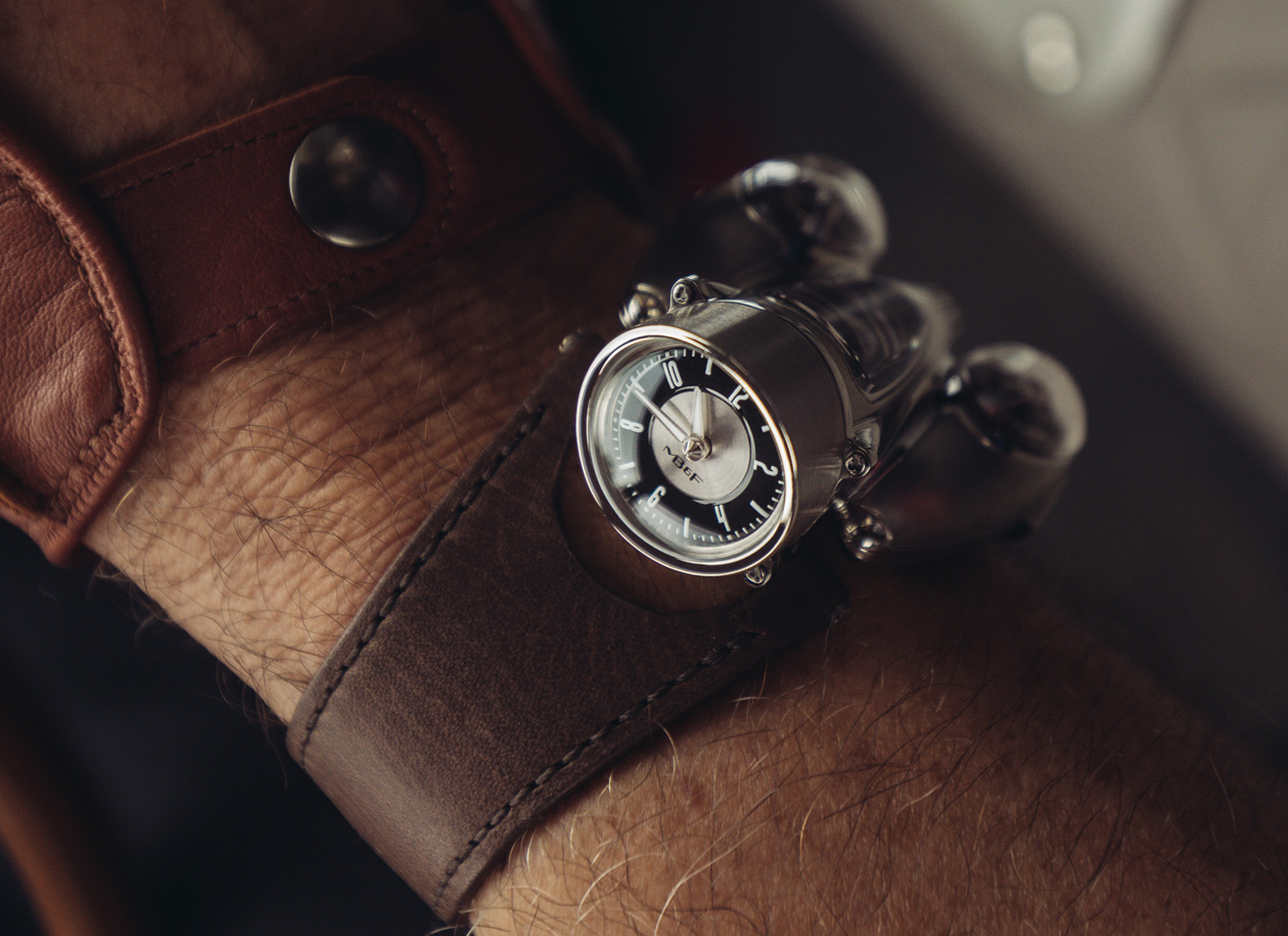 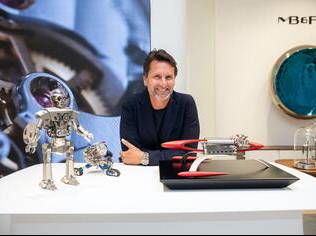 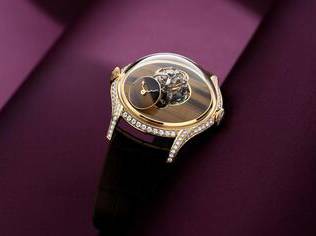 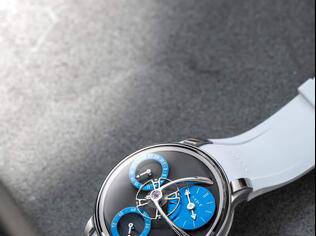 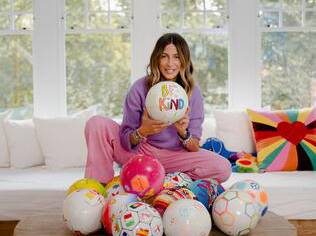 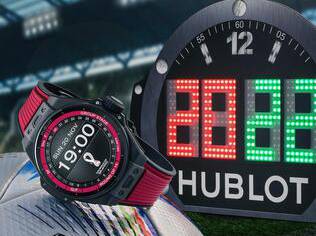 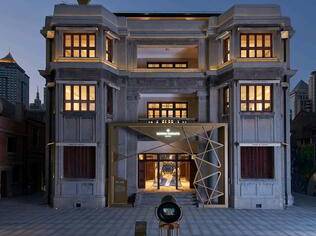 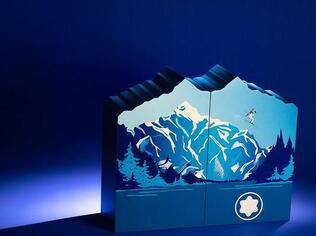 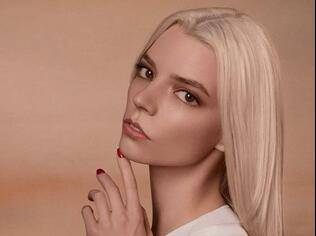 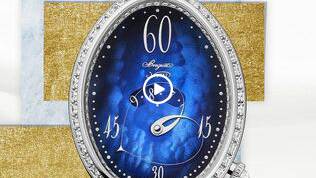 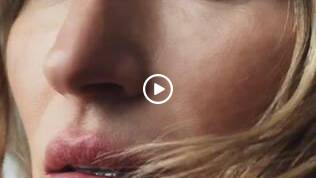 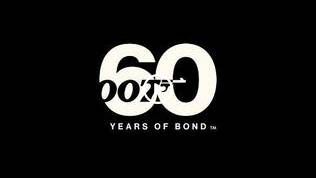