65 Years of a Diving Legend: Fifty Fathoms by Blancpain | SENATUS

65 Years of a Diving Legend: Fifty Fathoms by Blancpain

Since its creation in 1953, the Fifty Fathoms by Blancpain has been the archetypal modern diver's watch.

The collection embodies Blancpain's passion for the underwater world that was originally expressed 65 years ago with innovations that have defined the timepiece to accompany diving adventures, missions, both recreationally and military purposes.

To tell how Fifty Fathoms came to be iconic involves two intersecting storylines.

First is that of Jean-Jacques Fiechter a passionate diver who was Blancpain’s CEO for three decades, from 1950 to 1980. The second is that of Captain Robert "Bob" Maloubier and Lieutenant Claude Riffaud, founders of the French Navy's combat swimmers corps, who were searching for a reliable watch for their underwater missions.

In the early 1950s, Jean-Jacques Fiechter was a sport diving pioneer. Based on his personal underwater experiences, he came to understand that a diver's life depended upon a reliable timekeeping instrument and he saw that none existed in the marketplace at the time. As head of Blancpain, he tasked his watchmaking team with addressing the challenges of measuring time in the underwater environment.

To solve water resistance problem, he set about conceiving a double sealed crown system. Without a screw holding down the crown, this served to protect the watch from water penetration in the event that the crown were accidently to be pulled during a dive. The presence of the second interior seal worked to guarantee the timepiece’s water tightness. Jean-Jacques Fiechter registered a patent for this invention. A second patent was awarded for the sealing system for the caseback. This had indeed been a recurring problem with other pre-existing systems because of the way in which the "O" ring, used to seal the caseback, might become twisted when the back was screwed into the case. In order to eliminate this risk, Fiechter invented a channel into which the "O" ring would be inserted and held in position by an additional metallic disk.

He then addressed another problem: a secured rotating bezel that could be used to measure the time of a dive. His idea was to rotate the bezel so as to place its zero index opposite the minutes hand. In this way, the diver could read the passage of time while underwater using the minutes hand to read markings on the bezel. Here too, security was front and center in Fiechter's thinking. Any accidental movement of the bezel could induce a timing error with dramatic consequences. Fiechter therefore perfected a blocking mechanism which would prevent accidental rotation of the bezel. For this he received another patent.

Later, Blancpain introduced a uni-directional rotating bezel, a world-first feature which also ensured safety during a dive. Readability was also recognized a vital factor, in particular during dives in cloudy water. So Jean-Jacques Fiechter came up with the idea of endowing the Fifty Fathoms with large diameter and giving it the bold contrast of white luminescent indexes and hands set against a black background. Automatic winding of the movement was also seen as essential in this construction, as it would reduce the wear of the crown against its seals in comparison to manual winding. 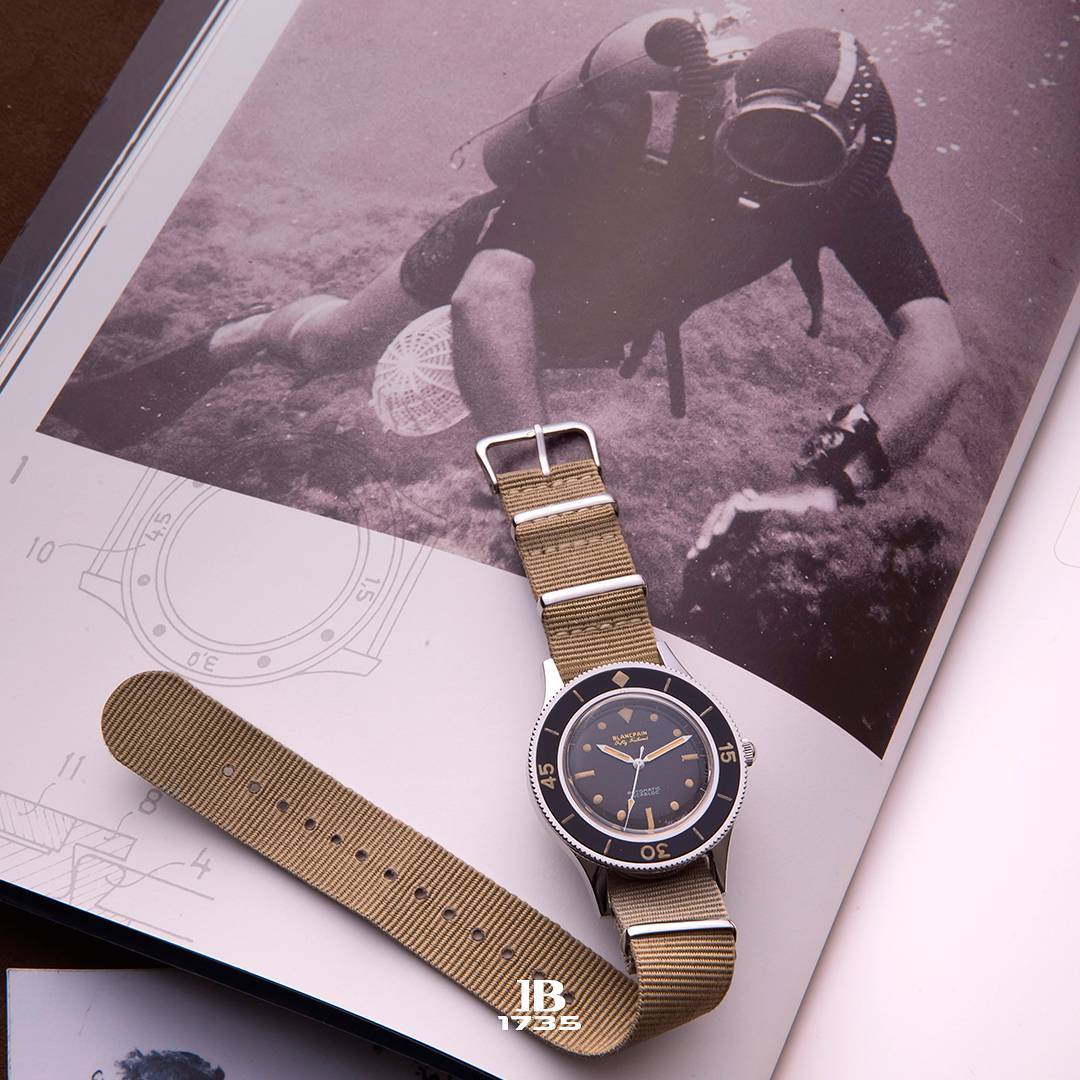 In parallel, beginning in 1952, Bob Maloubier and Claude Riffaud began their quest to find a watch suited for their aquatic missions. The two officers envisaged finding a watch that would become an indispensable piece of equipment for their divers. Working together, they assembled a list of specific criteria for an instrument that would meet their requirements. The first tests which they conducted with water-resistant French watches were disastrous. These watches were far too small, the dials were hard to read, and the cases were far from water proof.

The paths of these two sets of visionaries finally crossed.

In 1953, Blancpain was able to deliver to the French team a watch for testing that fully met their criteria. The watch performed brilliantly in all of the tests and it became one of the essential pieces of equipment for the French combat swimmers corps.

Later, it would adorn the wrists of naval forces around the world. 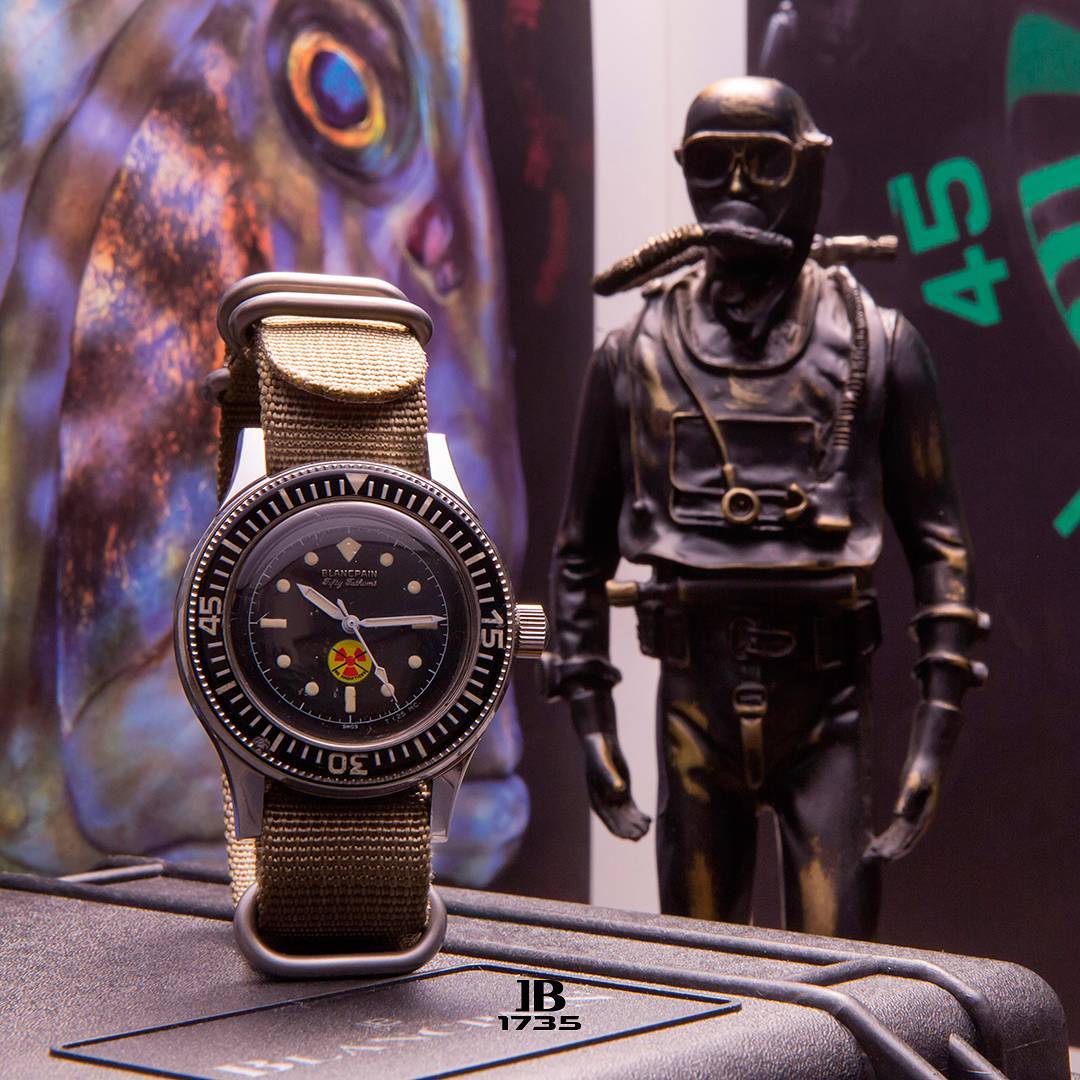 The ideas and concepts woven into that first Fifty Fathoms have defined diving watches for the entire industry ever since.

Blancpain now also accompanies divers and underwater photographers in their exploration and discovery of the oceans' fragile beauty, thus contributing to the knowledge of this fascinating universe and to the motivation to protect it.

All Fifty Fathoms models feature the main signature elements that forged the reputation of their legendary ancestor and established it as the archetypal diver's watch. The same professionalism is apparent in the decisive design choices, dictated by a wealth of experience in the field of diving, its risks and its imperious necessities. 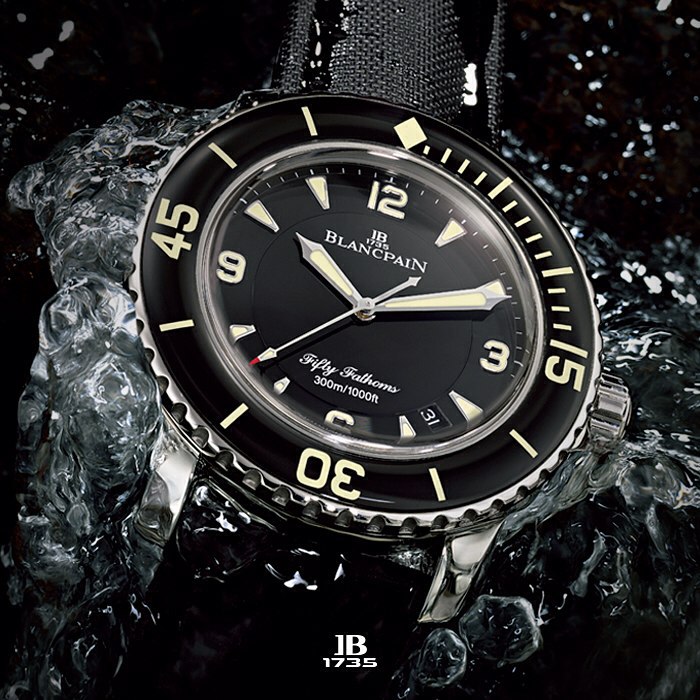 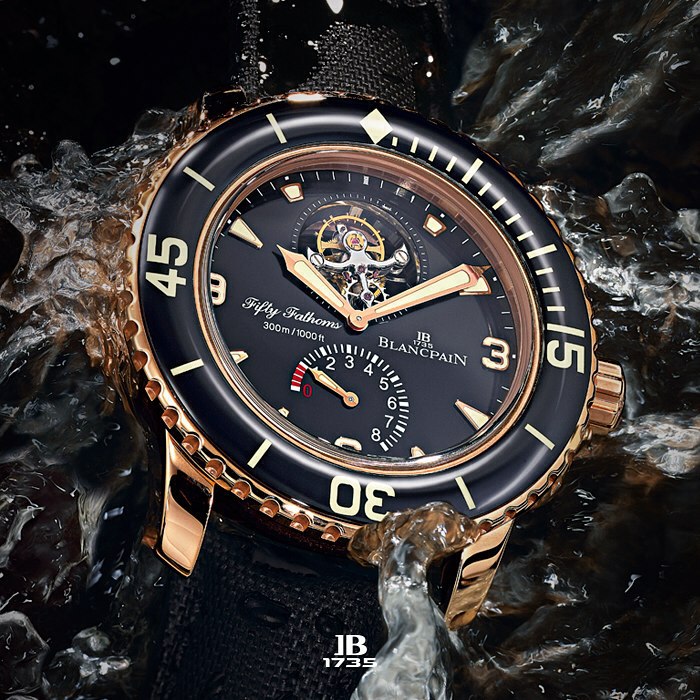 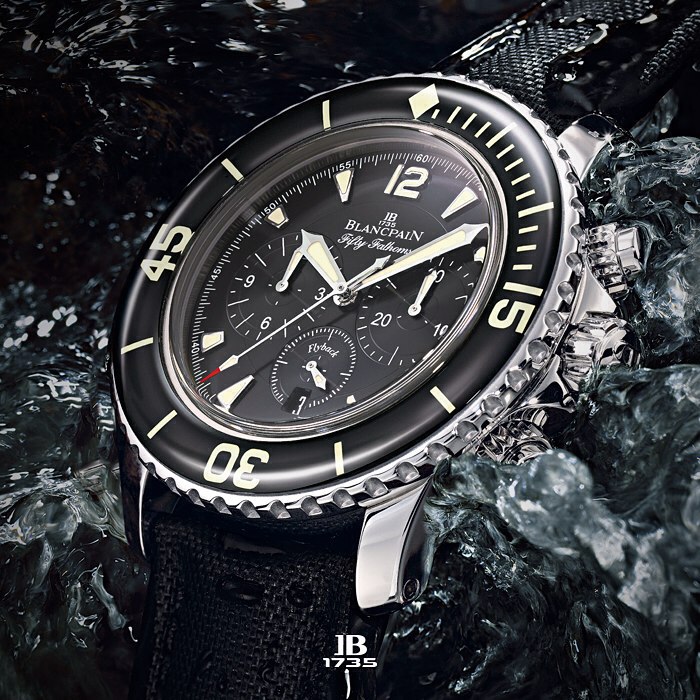 The latest additions to the collection are extraordinary technical achievements as well as a tribute to the pioneers who made scuba diving possible. It is their passion and dedication which opened up whole new vistas for underwater exploration and that continue to inspire Blancpain in using innovative materials and new technical solutions in order to push the limits of its timepieces and to fulfil the most sophisticated demands.