Macallan, the luxury single malt whisky brand, has made Annie Leibovitz the photographer for the third edition of its award-winning "Masters of Photography" series where the fine art of whisky making meets with the artist’s stunning interpretation of the world of Macallan.

Chosen because of her exceptional skills and inimitable style as one of the world's most famous photographers, Leibovitz brings to life the essence of Macallan through her unique storytelling ability.

"I am the first colour photographer chosen by The Macallan for its Master of Photography series, prior to this I hadn’t realised how complicated and deep the distilling process is.

That warmth and richness is what I tried to bring to the photographs.

"Kevin McKidd drove the imagery. Where Kevin comes from and his rugged good looks are what the photographs are all about. It wasn’t casting, it’s authentic." says Leibovitz. With previous editions shot by other iconic photographers such as Rankin and Albert Watson, this latest edition stars renowned Scottish actor Kevin McKidd as the leading man shot against the dramatic backdrop of urban New York City.

The charismatic actor who plays Owen Hunt in the widely popular US television drama "Grey’s Anatomy" and Tommy in Danny Boyle's 1996 cult film Trainspotting, hails from Elgin, a few miles away from The Macallan Distillery on Speyside where he once worked, making him the perfect choice for the role. "This project is very special to me. Having worked at The Macallan distillery in my youth I remain a Macallan drinker to this day so to be asked by The Macallan to be part of this campaign was a huge honour. Annie Leibovitz is a living legend so to be photographed by her is a once in a lifetime experience”

The result is a set of 4 powerful images, showing the actor seated in a library modelled after Sir Walter Scott’s personal home library in Abbotsford, with friends at the Hudson Red Spot Bar, in a private gallery located in Upstate New York and against the breathtaking Manhattan skyline at daybreak. Each shot features one of four single cask variants: the deep red mahogany 1995, the 1989 single malt, the 1991 and the 1996 whisky all of which has been released for the very first time. Globally, the Macallan Masters of Photography: Annie Leibovitz Edition comprises 1,000 limited edition bottles. Each bottle contains one of the four unique single malts, crafted to reflect the mood of the signed Annie Leibovitz print that it is paired with.

The four single cask whiskies have been matured in different cask types to be completely unique and original.

The bottle and print are presented in a bespoke photo-archival box, stamped with The Macallan brand and Annie Leibovitz’s name. Showcasing the stature of the Macallan whisky as an icon of taste and masculinity, this Leibovitz edition of the "Masters of Photography" series solidifies The Macallan as ‘The Last Word’ in luxury. A further four individually customised bottles of The Macallan 1949 from the exquisite and highly collectable "Fine and Rare Collection" will also be released. Accompanied by a signed one-off gallery-sized print, they will be made available following a world exhibition tour to Hong Kong, Moscow and New York. 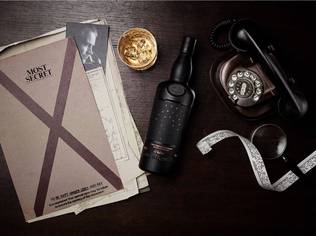