Year of a Million Dreams by DISNEY | SENATUS

Year of a Million Dreams by DISNEY

Scarlet Johanessen as Cinderella
As Cinderella, Scarlett Johansson is seen running down a flight of stairs as the clock strikes midnight with her glass slipper unknowingly left behind. The tagline reads, “Where every Cinderella story comes true".

Befitting a true princess, Johansson wears a stunning, one-of-a-kind Harry Winston tiara ~ a dazzling piece in platinum with more than 62 carats of sparkling diamonds and valued at $325,000. The dress worn by Johansson is a custom-made, Cinderella-inspired gown designed by Nicoletta Santoro.

"It's two great imaginations coming together, Disney and Annie Leibovitz,"said Lovett. "To be along for the ride really is quite something, just knowing that you're going to be part of a great Disney character. And then when you step into the imagination of Annie Leibovitz, you know you're in another world."

Other photo spreads include:

Rachel Weisz as Snow White, Roger Federer as King Arthur from The Sword in the Stone, Julie Andrews as the Blue Fairy from Pinocchio with Abigail Breslin as Fira from Disney Fairies. Jennifer Lopez as Jasmine, Marc Anthony as Aladdin and Whoopi Goldberg playing the Genie; Giselle Bundchen as Wendy Darling, Mikhail Baryshnikov as Peter Pan and Tina Fey as Tinker Bell; and Jessica Biel as Pocahontas. Actress Julianne Moore, Swimmer Michael Phelps Live Out Their Disney Fantasea In Ariel-Inspired Annie Leibovitz Photography. 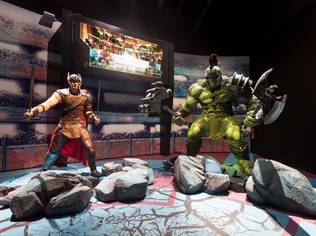